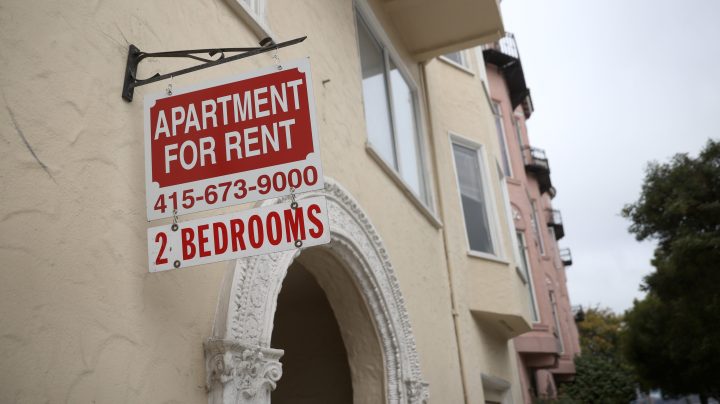 COPY
Amid a boom in residential real estate, Sandy Lewis and her family have struggled to find an affordable rental. Justin Sullivan via Getty Images

Amid a boom in residential real estate, Sandy Lewis and her family have struggled to find an affordable rental. Justin Sullivan via Getty Images
Listen Now

Low interest rates and a severe shortage of homes for sale are contributing to rising costs for both renters and would-be homebuyers. Like many households across the country, Sandy Lewis and her family are facing an increasingly unaffordable rental market and limited housing options.

Lewis, 79, her husband, 82, and three of their adult children (two of whom are disabled) had just one month to pack their belongings and find a new place to live after 21 years of renting the same home in Springdale, Arkansas.

“With the hot real estate market, our landlady decided she wanted to sell,” she said. “And then she sent us a letter saying we had to be out in 30 days.”

According to a biannual report on real estate in Northwest Arkansas, the inventory of homes available for sale in Washington and Benton counties — where Springdale is situated — is at a record low.

Zillow, which tracks housing data, reported that rents nationwide were 7% higher in June compared to the year before, marking the largest annual increase since at least 2015.

“We’re all on a fixed income … and just could not find a rental that we could afford,” Lewis said.

With the clock ticking, Lewis and her family packed many of their belongings into two storage units so that they could move out of their current rental and into her daughter’s home in Conway, South Carolina (one son stayed in Arkansas and the other returned there).

“Until we are able to get a place of our own, that’s what we had to do,” Lewis said. “At some point, we will have to go back and bring everything with us, but that’s very costly, so I don’t know if or when that will happen.”

Friends and family donated to help fund the family’s transition to South Carolina, but so far they’ve been unable to find a suitable rental there either.

For now, Lewis, her husband and disabled daughter are living with her other daughter and her husband in South Carolina. That’s five adults, three dogs and three cats sharing her daughter’s three-bedroom home.

“For now, it’s temporary, [but] it could be permanent. I have no idea,” Lewis said. “I just don’t know where we’re gonna end up.”