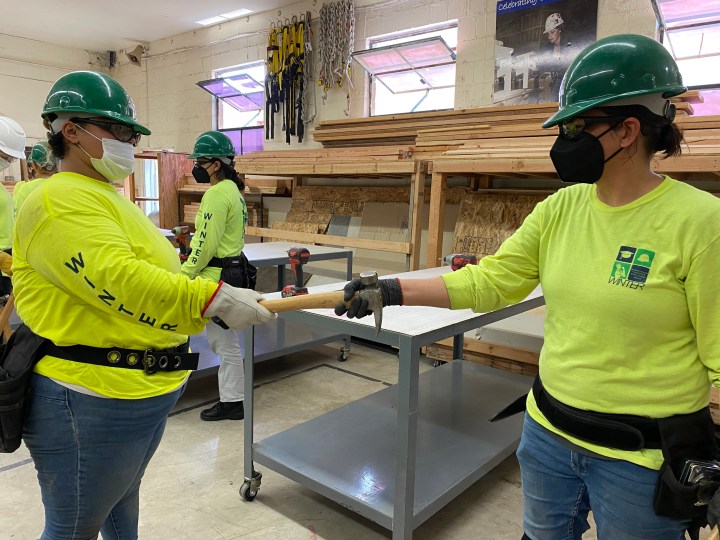 COPY
Melissa Delgado, left, and Rebecca Gollnick-Starr practice the proper way to hand off a hammer on a jobsite. Both are in the pre-apprenticeship program at Women In Non Traditional Employment Roles. Jill Replogle

Melissa Delgado, left, and Rebecca Gollnick-Starr practice the proper way to hand off a hammer on a jobsite. Both are in the pre-apprenticeship program at Women In Non Traditional Employment Roles. Jill Replogle
Listen Now

This pre-apprenticeship training program is put on by the nonprofit Women In Non Traditional Employment Roles, or WINTER. It’s one of just a few programs across the United States that specifically helps women prepare for construction apprenticeships.

The training is free but intense. The goal is to get these women ready for a physically demanding job that’s competitive and overwhelmingly dominated by men.

Getting into an apprenticeship can be a long road, and not necessarily a welcoming one for women.

In 2020, women made up just 4% of skilled construction workers in the U.S., including plumbers, carpenters and electricians. That tiny share has inched up only a few percentage points since the 1980s.

Retired electrician Meg Vasey said she was one of just eight women in her Northern California union when she joined in 1981. She said there were about a thousand men. She now runs a training and advocacy organization called Tradeswomen Inc.

“They insisted on calling me Brother Vasey because it was the International Brotherhood of Electrical Workers, so there were no sisters,” she said. “I was told all the time that I was taking a man’s job and that I had no right to be there.”

Pornography was all over job sites, she said. “When I opened up the gang box where all the tools were, there would be big Hustler displays.”

Vasey thinks she never would’ve been interviewed for the apprenticeship if it weren’t for Executive Order 11246.

The equal employment rule, signed by President Lyndon Johnson in 1965, prohibits federal contractors from discrimination in recruitment, hiring and other employment matters, and requires them to take affirmative action to diversify their payrolls.

In 1976, the National Women’s Law Center sued the U.S. Department of Labor for failing to enforce the federal rule, and goals were set for women’s participation: 6.9% of work hours on federal contractors’ job sites.

Today, women make up just 9% of federally registered apprenticeships, and most of them are in industries that pay less than construction, according to government data.

Vasey said there are likely multiple reasons the number of women in construction has remained so low. Women, and especially girls, are rarely exposed to potential careers in the skilled trades.

“I do think there’s not enough women who know about this work,” Vasey said.

There’s also implicit bias among employers, she said. Some might think women can’t handle the job physically. Women also frequently face sexual harassment and bullying on job sites, according to Vasey and other media reports.

Vasey and others said, as it stands, getting into a skilled trade is almost like a family secret.

“Friends, brothers and in-laws. Those are the men who get in as well, on a regular basis, into construction,” Vasey said.

Pre-apprenticeship programs like WINTER’s provide an alternative route into the trades, especially for women and people of color. The six women in this cohort range from 24 to 52 years old. There’s a photographer whose work dried up during the pandemic and a host at an Outback Steakhouse.

Diana Lantan, 31, currently works as a server at a bar to pay the bills for her and her 11-year-old daughter. Lantan said she’s always been a tinkerer.

Jannel Herrera, 33, works as a project manager in telecommunications. After being laid off twice in the last four years, she hopes a union job in construction will be more stable.

“I don’t want to have to worry how am I going to help my kids,” she said.

Besides construction training, these women also learn life skills, like how to nail a job interview. There’s also a counselor who helps with things like finding child care and housing.

The ultimate goal is to land an apprenticeship and become a journeywoman. That comes with benefits and among the best salaries you can earn without a high school diploma. In some parts of the country, plumbers make $45 an hour or more.

President Joe Biden said he wants to create 1 million to 2 million new apprenticeship slots — and strengthen the apprenticeship pipeline for women and people of color.

After decades of minimal progress getting women into the trades, Vasey, the former electrician, said she now sees more hope than she has in a long time.