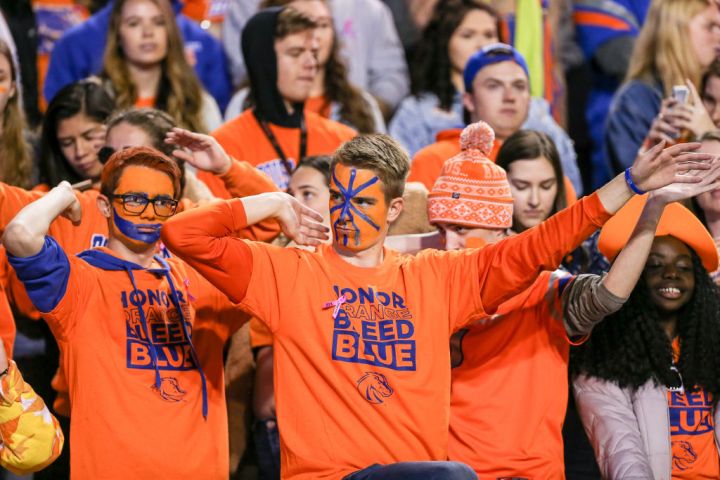 For decades, thousands of students have postponed the start of a college education to experience a “gap year,” typically a period of travel, volunteering or working to save money for tuition.

The COVID-19 pandemic forced many students to re-evaluate their college plans. About 120,000 more high school graduates opted to delay starting college last fall compared to the year before. Affluent students were more likely to make this choice, according to data from the College Board.

In an effort to keep those wandering freshman from finding themselves at other schools, Boise State University tried something new: A reduced cost gap year program for college credit.

Autumn Lay was one of several dozen students in the pilot program. She’d had a tough 2019-2020 as a sophomore and planned to take a break from college and work full time while she reconsidered her path.

“Then gap year came and I was like, wow, this is exactly what I need right now,” she said.

While Lay said she thinks she would have returned on her own eventually, many students taking a break never return. Approximately 40% of students who start never finish a degree program.

“I think this program is uniquely positioned to provide support for those students who do have interests or a goal of going to college, but get stuck for whatever reason or experience barriers,” said Bronco Gap Year Program Director Kelly Myers.

Boise State’s Bronco Gap Year program allowed students to craft their own independent study or work within a theme, like entrepreneurship or public service, and required them to complete a project at the end. Enrollees also receive access to a large library of classes through the University’s partnership with online education provider Coursera.

The real “secret sauce,” as Myers called it, was the 5-to-1 staff to student ratio. The pilot program offered career and academic counselors, staff and peer mentors, too.

“That was the real magic of it,” she said. Many staff built mentoring and tutoring responsibilities into their existing work schedule and compensation.

“I think a lot of us felt a lot of us just really wanted to be able to serve and support students in a time of great uncertainty.”

The bad news was that the pilot program was simply too expensive to scale up and serve more students.

Myers’s summer challenge was crafting a budget which could both support the program, allow for the most individual guidance possible and still remain affordable for part-time students.

What she and program administrators said they learned through the first two semesters allowed them to build a more universal set of procedures, which in-turn allowed a shift from a one-on-one support model to small cohorts of five students.

They ended up raising the price of the program 33% in order to break even, but were able to offer the option to up to 500 part-time, gap year students.

She says even though they had to change the recipe for the secret sauce, the end result for students should remain the same.

“We’re helping them connect to people and opportunities that align with their interests.”

Other schools have taken notice. Boise State is partnering with Louisiana Tech University to establish a gap year program there starting this fall.

Dr. Lewis Sandborne is senior vice president for Enrollment and Student Success at Ruffalo Noel Levitz, a higher education consultant group. He expects the number of full-time college students will continue to decrease as the expense of higher education and life experiences beyond campus continue to grow.

“If we live in an experience economy right now, and that’s clearly what consumers are telling the marketplace,” he said, “then education needs to be able to understand how it needs to reframe itself.”

In short, Sandborne said, schools need to do a better job of focusing on student needs instead of institutional needs.

One pandemic change he hopes will stick around is online advising appointments.

“A number of the institutions that I’m talking to actually saw a decreased no-show rate at virtual advising appointments than they had when they were doing face-to-face,” he said.

Adding the Gap Year Program helped Boise State hold on to students like Autumn Lay, who now plans to pursue an education degree.

“[The gap year program] helped me to realize what I wanted to do and what fits me best as a person,” she said, noting that she was still going to delay re-enrolling until after she takes an online coding course and continues to work during the fall semester.

Other students in Boise State’s Gap Year pilot program will be on campus this fall, but not all. For some, the path they traveled last year led to another university or the decision to jump into a career without further education. Myers said that’s still a success.

“We do everything we can to create that bridge into the university. But if it’s not the right fit ultimately for them, then we’re going to celebrate whatever plan they leave with.”