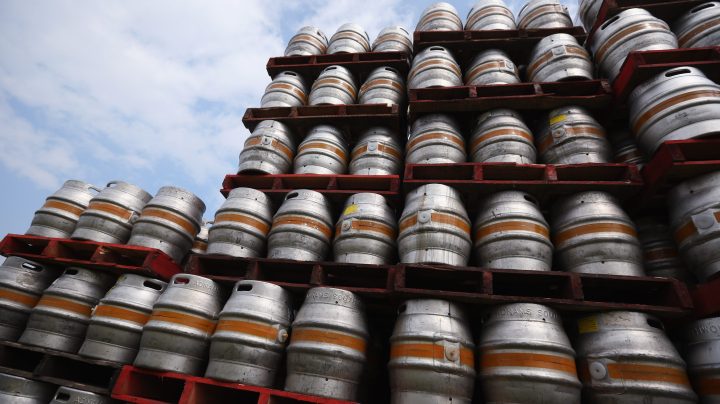 COPY
Kegs stacked outside distribution for a brewery in Reydon, England. A supply chain management exercise known as the “beer game” can help illustrate the forces creating shortages across the economy. Photo by Oli Scarff/Getty Images
Temporarily Unavailable

Kegs stacked outside distribution for a brewery in Reydon, England. A supply chain management exercise known as the “beer game” can help illustrate the forces creating shortages across the economy. Photo by Oli Scarff/Getty Images
Listen Now

From computer chips to chicken wings, the pandemic has led to shortages across the economy. One reason they’ve been so severe and so widespread is an economic phenomenon known as the “bullwhip effect.”

What is the bullwhip effect?

“The bullwhip effect is an oscillation — in other words, supplies and demand go up and down — as you go from the consumer all the way back to the factory,” said Willy Shih, a professor at Harvard Business School. “And this oscillation looks like somebody cracking a bullwhip — where the person is holding the whip, you have small oscillations, but as you get farther and farther up the chain to the factory, the oscillations become bigger.”

For example, a small spike in consumer demand at the store level might cause a retailer to order slightly more product from wholesalers. The wholesaler, seeing that demand spike, might put in a bigger order increases with their distributor. That might trigger the distributor to put in an even bigger order increase from the factory, potentially causing the factory to overproduce.

“Everybody in the chain puts their own spin,” Shih said. “You see this bullwhip effect of the demand kind of rippling up the chain and then all of a sudden it’s like, ‘Whoops, I didn’t need that much,’ and it kind of ripples back down that chain.”

In the 1960s, a group of researchers at the Massachusetts Institute of Technology developed an exercise to simulate supply chain dynamics using beer as an example. Versions of the “beer game” or “beer distribution game” are commonly used to teach supply chain principles and demonstrate the bullwhip effect.

Shih plays a version of the game with his students (you can play a demo version here) and said they invariably run into trouble “because everybody wants to outsmart everybody” else.

Cool game. Why should I care?

One of the lessons of the game is that players trying to “outsmart” each other can have disastrous consequences for the supply chain.

“We see this going on among the notebook computer makers right now,” he said. “We have a semiconductor shortage and so all these guys are ordering more chips.”

Hoarding during periods of high demand creates the illusion of even higher demand, exacerbating the bullwhip effect.

“The answer is really for everybody in the chain to share information,” Shih said. “If everybody can work together, then you can really optimize it.”