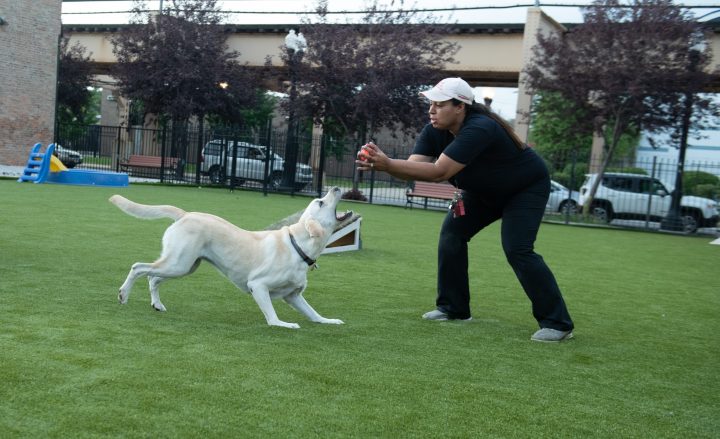 COPY
Tara Robertson, owner of PupStars Pet Care in Chicago, works with one of her canine customers. Courtesy of Tara Robertson
My Economy

Tara Robertson, owner of PupStars Pet Care in Chicago, works with one of her canine customers. Courtesy of Tara Robertson
Listen Now

As more people return to in-person work, dogs are returning to pet-care facilities after long stretches of staying home with their humans.

“We went from nearing 55 dogs a day to having about eight at the start of the pandemic,” said Tara Robertson, owner of PupStars Pet Care in Chicago, which offers pet day care, boarding, training, grooming and other services. “Now that they’re going back into the office part time, they’re bringing those dogs back to us,” she said.

According to a survey by Gallup, roughly 58% of U.S. workers were working remotely all or part of the time in February compared to 70% last April.

“The dogs that are returning to our care … they’re acting differently than when we saw them before the pandemic,” Robertson said. “We’ve definitely noticed some personality changes.”

“It’s really interesting to see,” she said. “We’re all creatures of habit, and we thrive on routines and consistency.”

Despite the challenges of reacquainting dogs with each other and with day care, Robertson said she and her staff are prepared for an influx of customers once lockdown measures fully lift.

“Depending on what our government does and the phases that they roll out capacities for businesses, we might have 10-15 new dogs in a week,” she said. “That is a lot [of dogs] to try to learn and place.”

Robertson advises anyone with a pet returning to in-person work to plan ahead.

“Take your pet to the groomers, to the kennel, to day care, whatever it is … so it’s not such a culture shock, so to speak, when, you know, that day comes,” she said. “Dog and human alike, we just have to figure it out.”