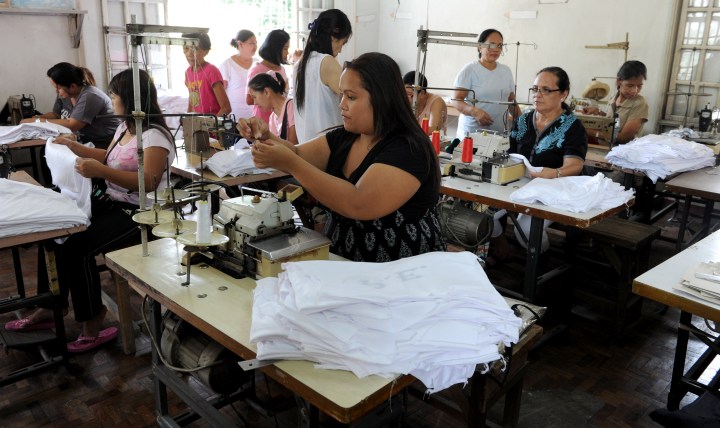 Women work at a sweatshop sewing clothes under contract with local clothing manufacturers in Manila on July 12, 2013. JAY DIRECTO/AFP via Getty Images

While working on this season of “The Uncertain Hour,” we heard a lot of words and phrases that sounded weird to our ears. So each week we’re going to explain a bit of jargon. To get a new “Uncertain Term” in your inbox, subscribe to our newsletter! To go with our sixth episode, this week’s Uncertain Term is “sweating system.”

The term “sweating system” describes the subcontracting arrangements that many factories, particularly in the garment sector, used to hire workers back at the turn of the 20th century. The middleman subcontractors were known informally as “sweaters” because they “sweated” out a profit — in other words, they took a cut — from what manufacturers paid for the labor they brought in.

As you might have guessed, this is where the term “sweatshop” came from. Labor brokering was a competitive business, and one way for sweaters to win contracts was to lower prices for their services. Profit margins were slim, and that, in turn, drove down wages for their workers. Sweatshops became synonymous with poor working conditions — like low wages, long hours and child labor.

Sweatshops are still around today. In 1999, a group of subcontracted workers in New York City sued garment manufacturer Liberty Apparel for unpaid wages. Liberty didn’t directly employ the workers, but the case argued the garment manufacturer was a “joint employer” and therefore liable for violating federal minimum wage law. That case is part of a legal legacy we talk about in this week’s episode of “The Uncertain Hour.”  Listen below, or wherever you get podcasts.