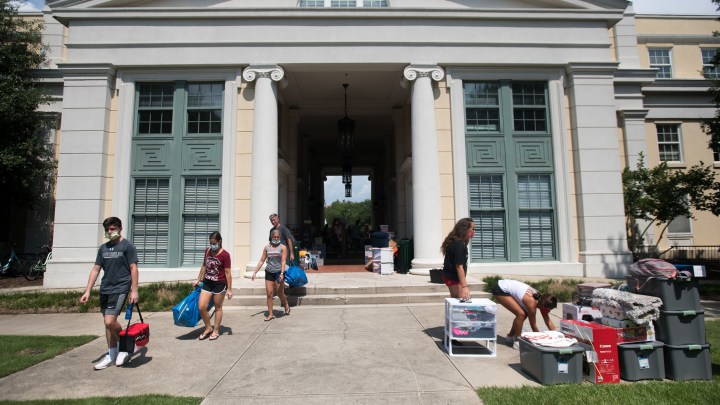 COPY
Students and their families move belongings at a campus dormitory at the University of South Carolina on Aug. 10, 2020, in Columbia, South Carolina. Sean Rayford/Getty Images
COVID-19

Students and their families move belongings at a campus dormitory at the University of South Carolina on Aug. 10, 2020, in Columbia, South Carolina. Sean Rayford/Getty Images
Listen Now

The new year also means the start of a new semester for colleges and universities. But some institutions are once again delaying the start of classes, or moving what would have been in-person classes online.

Those decisions are being driven by the pandemic, and the surge of infection rates around the country. But this second round of delayed starts and online classes will have both immediate and far-reaching financial implications for institutions.

Marybeth Gasman’s daughter is a student at Bryn Mawr College. She was supposed to go back to school in mid-January and now she’s looking at mid-February.

“They’re definitely coming back on campus and staying in residence halls,” she said. “But the last email we got was, you know, this could change at any point.”

Gasman isn’t only a college parent. She teaches at Rutgers and studies minority-serving institutions of higher education. Schools are weighing health risks and their finances to make decisions, she said.

Dire because of reduced enrollment and unexpected costs — millions of dollars spent on personal protective equipment and COVID-19 testing.

Chris Marsicano is with the College Crisis Initiative at Davidson College. He said these decisions are harder for state schools and smaller ones.

“A lot of institutions are heavily dependent on tuition and room and board in order to keep their doors open,” he said.

School budgets are in worse shape now than they were last fall, said Robert Kelchen, a professor of higher education at Seton Hall.

“But on the bright side, there’s a clearer ending point to the pandemic than there was in the fall,” he said.

That’s due to the vaccine. And, Kelchen said, schools have taken other steps: laying off staff, canceling majors, delaying entry to PhD programs and pay cuts.

Kelchen said his pay was cut by 7% in the Spring. It’s unclear when it’ll be restored.