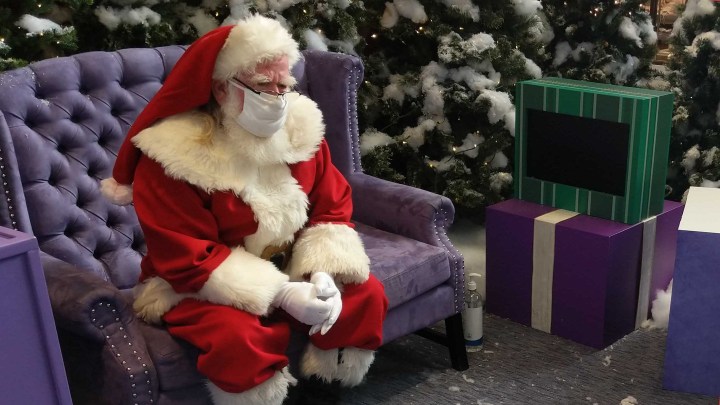 COPY
At the Mall at Green Hills in Nashville, no one sits on Santa Claus’ chair this year except the man himself. Emily Siner/WPLN News
COVID-19

At the Mall at Green Hills in Nashville, no one sits on Santa Claus’ chair this year except the man himself. Emily Siner/WPLN News
Listen Now

The Mall at Green Hills in Nashville, Tennessee, is still piping in Christmas music, and Santa is in the building. But there’s no line this year. Families just show up for their time slot. And kids don’t sit on Santa’s lap. Instead, they perch on boxes more than six feet away.

“What do you want Santa Claus to bring you for Christmas?” asked Santa, who also goes by the name Keith Auston.

It’s hard to hear the kids’ answers through the mandatory masks. “Tell you what, you can let your mother know and she can let me know,” he said.

Santa Claus, and the malls and department stores that host him, are doing business differently this year. It’s been a trial of a year for indoor shopping malls across the country. But Norah Buikstra, the general manager for the Mall at Green Hills, says this holiday season is proof that malls are resilient.

“We have been through a lot, and it’s been very challenging, and yet, here we are,” she said.

She said her staff did consider pausing the in-person tradition this year. But they decided it served a purpose.

“I think it helps people to have this experience that’s maybe not exactly like normal, but it’s closer to normal,” she said.

Malls in Nashville secured the blessing of the city Health Department to do this. But, elsewhere, some companies are going virtual. Macy’s did away with in-person Santas this year. Cherry Hill Programs, which runs Christmas sets at hundreds of shopping centers— including the one at the Mall at Green Hills — now also offers video calls. And that’s something the site VisitWithSanta.com has been doing for several years. Fred Lueck is the company’s CEO.

This year, business has boomed. Lueck said they’ve hired twice as many Santas as last year. And even when more people feel comfortable visiting malls in person again, he’s optimistic about the interactive video call model.

” ‘Cause a chair Santa does not equal a Santa who can sit and talk with your family for a long period of time,” he said.