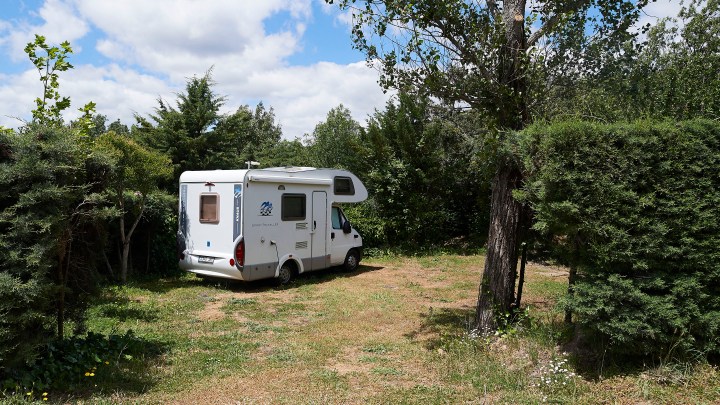 COPY
The RV industry is having a hard time keeping up with demand, partly because RV makers were forced to shut down for a while in the early days of the pandemic. Carlos Alvarez/Getty Images
COVID-19

The RV industry is having a hard time keeping up with demand, partly because RV makers were forced to shut down for a while in the early days of the pandemic. Carlos Alvarez/Getty Images
Listen Now

Thirty-two-year-old Kira Pickens is the proud owner of a brand new, $12,000 camper. She and her husband Ryan tow it behind their Toyota Tacoma when they want to get out of Austin, Texas.

“It’s just a little pop-up. So, instead of like the canvas pop-ups that get wider, it just kind of pops up to like an A-frame,” Pickens said.

She said they’d been talking about getting an RV for a while and decided to make it a Christmas present to each other last year.

“We got it in January,” she said. “And then, it’s like, come March and April, it became a boom where everybody was getting one. So I’m kind of actually really glad we got it before that.”

RV prices have been rising during the pandemic.

Monika Geraci with the RV Industry Association said sellers first noticed something going on in the spring, which is already normally a good time for RV sales.

It kind of makes sense. Over the summer, lots of folks didn’t go on vacation and stay in hotels. Instead, a lot of people bought RVs.

Geraci said suppliers are seeing a big increase in first-time buyers who are overwhelmingly buying cheaper, towable RVs. Shipments of those units are up more than 35% from a year ago.

In fact, the industry is having a hard time keeping up with demand.

Colin Duffy sells RVs at Camper Clinic just south of Austin, and said he can’t order enough units from manufacturers. That’s partly because RV makers were forced to shut down for a while in the early days of the pandemic.

“So what happened was the factories shut down for 45 days for all of these different brands,” Duffy said. “And the dealerships sold off of what their existing lots had.”

And while new buyers are snapping up the RVs they can find at dealerships, not all of these RV converts are in it for the long haul. Industry observers are expecting a strong used RV market to develop on the other side of the pandemic.