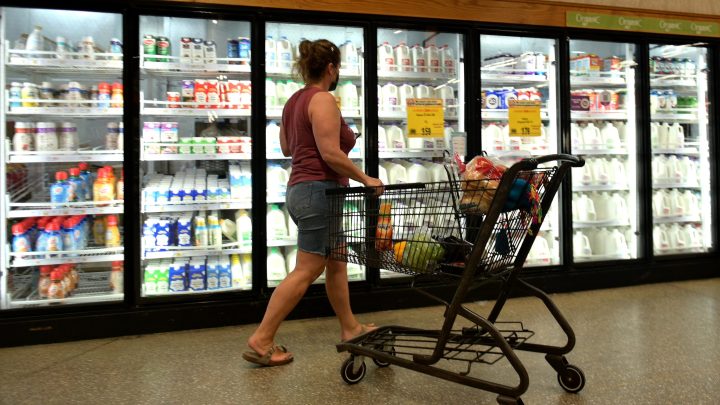 Chinasa Onukwubiri, a 31-year-old Washington, D.C. resident, decided to stock up on groceries and essential goods ahead of the presidential election.

She went to a Safeway on Sunday to pick up enough products like toilet paper and paper towels to last for at least a week. Her spending amounted to about $200, which is double of what she usually spends during trips to the grocery store.

Onukwubiri said because she couldn’t find some of the items she was searching for at the beginning of the COVID-19 pandemic, when many essential goods were sold out, she wanted to be prepared this time around in case there was any unrest.

“I was fearful of: ‘Would we be able to get the access that we need?’” Onukwubiri said.

On Twitter, people have discussed some of the fears surrounding the presidential election and how either they’re buying extra groceries or noticing empty shelves.

A survey released in October by Engagious, Sports and Leisure Research Group and ROKK Solutions, found that 52% of people plan to begin stockpiling (or have already stockpiled essential goods) in the coming months. Half of them say they’re doing so over concerns related to COVID-19, while 23% say it’s due to uncertainty over this presidential election.

Nancy Wong, a professor of consumer science at the University of Wisconsin-Madison, said it’s because stockpiling items, like we had seen earlier in the pandemic, serves as a security blanket.

“People feel assured and soothed by something that is concrete,” she said.

Although some grocery stores haven’t seen anything close to the panic-buying levels from March, they’ve seen an uptick in purchases recently.

Meg Headlee, a 23-year-old resident from Indianapolis, said that the possibility of unrest also prompted her household to buy groceries ahead of the election.

“We figured that if there was going to be any sort of protest or rioting, that it would be difficult for us to get out and go anywhere,” Headlee said. “So we just wanted to make sure that we could avoid that if it is happening.”

Prior to Election Day, stores in big cities across the country — including Boston, New York, Los Angeles, and Washington, D.C. — began boarding up.

However, widespread unrest hasn’t materialized, according to the Associated Press. The AP noted that small demonstrations were reported in Los Angeles and Portland, while a few dozen people marched through Minneapolis.

The election has yet to be decided, with delays in vote counting occurring in key battleground states due to mail-in ballots.

Outside of the election, grocery stores and manufacturers are increasing food production to avoid any shortages as COVID-19 cases continue to rise across the U.S., reported ABC News.

ABC pointed out that Campbell Soup Company is investing $40 million to increase production of Goldfish crackers and chips.

During times of collective stress, Wong said that people are more likely to buy calorie-dense, comfort foods, which matches what some businesses have been observing in their stores.

Stew Leonard — who owns a chain of supermarkets in Connecticut, New York and New Jersey — told ABC that he’s seeing an uptick in panic buying with huge increases in purchases for comfort items like pizzas.

Buckingham said that shopping habits at her store normalized quickly after the early days of the pandemic, but she’s looking at the positive test rate everyday.