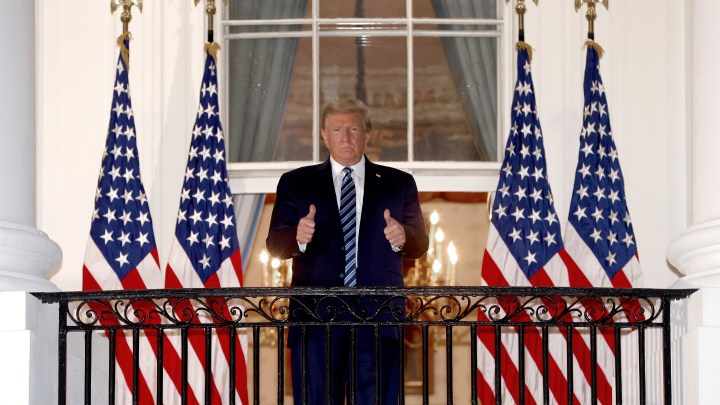 COPY
President Trump gives a thumbs up upon his return to the White House from Walter Reed National Military Medical Center on Oct. 05. The president said he was ending stimulus talks Tuesday, but later backtracked. Win McNamee/Getty Images
COVID-19

President Trump gives a thumbs up upon his return to the White House from Walter Reed National Military Medical Center on Oct. 05. The president said he was ending stimulus talks Tuesday, but later backtracked. Win McNamee/Getty Images
Listen Now

President Trump’s messages in tweets and signals over the last 24 hours have gone back and forth on whether he supports another coronavirus relief plan.

Relief from Congress would help boost the economy and help American households and the unemployed, small businesses and giant airlines and state and local governments.

Proposals have ranged from $1.5 trillion to $3 trillion. Federal Reserve Chair Jerome Powell called Tuesday for erring on the side of spending more rather than less to keep the recovery going.

But there may be none — at least until after Election Day. What does that mean for the economy?

Back in March, Washington sent $3 trillion coursing through the economy’s veins.

One of the biggest infusions was $600-a-week in extra unemployment payments to more than 20 million jobless Americans. That expired in mid-summer, and the amount of cash going out to laid-off workers cratered, according to Jay Shambaugh, an economist at George Washington University.

“It fell from $110 [billion] in July to $34 billion in September,” he said. “So there’s this massive drop-off to the economy and also to the most vulnerable households.”

Those $1,200 relief checks from the spring have been spent. With most of the federal pandemic relief now gone, “we’ve seen a slowing of retail sales and personal spending,” said Joseph Brusuelas, chief economist at consulting company RSM.

“Loss of civil service jobs will disproportionately affect minorities, because they’ve been hired into those jobs,” he said.

“OK, let’s say we don’t have a stimulus package, the economy gets pretty severely damaged in the short term — probably four or five years to get back to full employment,” said Dan North, chief economist at credit insurer Euler Hermes North America.

The burden is falling to families, that are running out of time and money, Graetz said.

“People are facing evictions, difficulty paying for food and lodging. This is a desperate situation,” he said.

One that the chaos in Washington isn’t making any better.

Treasury expects to borrow $3 trillion over next 3 months