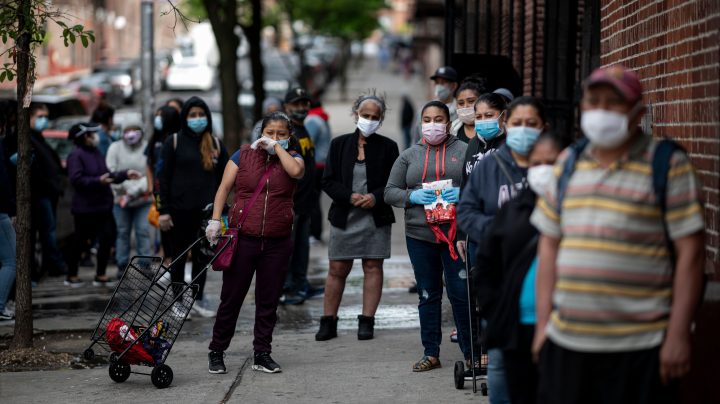 COPY
People line up for food donations in May in the Bronx neighborhood of New York, where locals say the lines outside food pantries are like nothing they’ve ever witnessed before. Johannes Eisele/AFP via Getty Images
COVID-19

People line up for food donations in May in the Bronx neighborhood of New York, where locals say the lines outside food pantries are like nothing they’ve ever witnessed before. Johannes Eisele/AFP via Getty Images
Listen Now

At St. Anne’s Episcopal Church in the Bronx, the line to get food often wraps around the block. It’s a mix of young people, children and the elderly.

Locals say they’ve never seen anything like this line before. They are everywhere in this town.

Garret Faber, a social worker who lost his job during the pandemic, said he comes to this line once a month to get food. He said his unemployment check is “not quite enough,” because his bills are pretty high and he pays rent. “I have other bills; I have student loans,” he said.

Many people who live here commute to Manhattan, often to work minimum wage and essential jobs. But these days, the Bronx is the epicenter of the COVID-19 pandemic in New York City.

St. Anne’s is in Mott Haven, where over 1,500 COVID-19 cases have been recorded. The South Bronx is part of the poorest congressional district in the U.S., and unemployment in the borough is now around 25%, according to analysts. That’s Great Depression levels.

That’s closely tied to the emptying out of Manhattan. “When the economy gets a cold, places like Bronx get pneumonia or cancer,” said Joel Berg, CEO of the nonprofit Hunger Free America.

He said life can be very tough for many residents in the South Bronx. But COVID-19 has been catastrophic. “Their tenuous living before this, when they were just on the edge of survival, has been destroyed,” he said.

Erica Groshen, a senior economic adviser at Cornell University, said jobs in Manhattan created what economists call a “multiplier effect.” Each job supports many others. It’s like game of Jenga though: When you take one piece out, the rest can come tumbling down.

As Manhattan offices remain mostly empty, many janitors, baristas, cooks, and other workers who call the Bronx home have simply seen their jobs disappear.