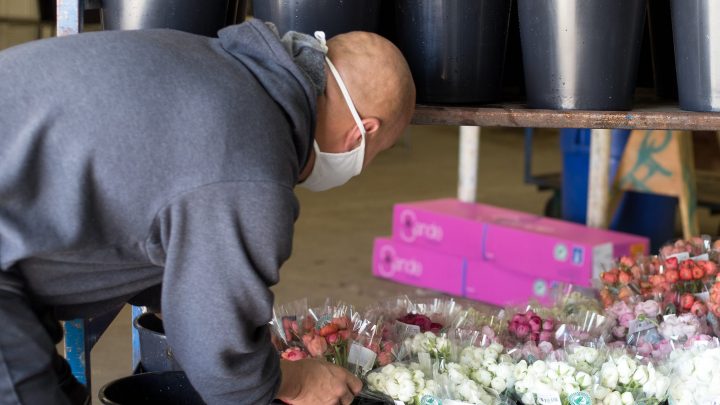 This week, the global death toll from COVID-19 passed 1 million people. Across the U.S., business owners are balancing economic risks against the risk of operating during a global pandemic.

Christina Stembel, founder and CEO of the direct-to-consumer bouquet company Farmgirl Flowers, changed the way she manages that risk, after contracting COVID-19 herself earlier this summer.

The following is an edited transcript of Stembel’s conversation with “Marketplace” host Kai Ryssdal.

Kai Ryssdal: Where have we gotten you? Because you’re not where you were last time we talked.

Christina Stembel: I am not. I’m down in Ecuador, near Quito actually, doing a supply chain trip, planning for our growth next year. And now is the time to be planning for our planting season with our growers down here.

Stembel: Yeah, this year, you know, when we talked last, just gotten through a really good Mother’s Day and we were just so grateful and counting your blessings from that. And then [I] was really concerned about summer. Summers are always a much harder time for us. Sales usually go down 30% to 50% during the summer months, and we didn’t see that happen this year at all. For the summer months, we were at about 100% growth year over year, which was just incredible for us. So we’re really grateful for that.

Ryssdal: Yeah, I know, I bet. But how come you had such great growth? Because as you know, this has been a questionable year economy-wise.

Stembel: Absolutely I feel like everything this year is kind of up in the air and so it’s just a lot of guesswork. I think, one is that we just have incredible customers that really rallied around us and supported us with our dollars. And then the second reason, I think, is just a lot of, you know, what’s going on in the world. We’re benefiting from [it] somewhat, which I feel a little guilty saying when so many people are hurting. But we’re e-commerce, you know. And people can’t be with others that they love around them personally, and so they’re sending a lot of gifts. And we’re in the gifting space. So I think e-commerce companies in the gifting space are benefiting from it, and I don’t want to take that lightly or for granted.

Ryssdal: Yeah, no, I get that. But look, you benefit from being in the gifting space and e-commerce on the consumer-facing end. But what has the pandemic, and you know, supply chain supply chain disruptions, which are global, right?

Stembel: Yeah, it’s been incredibly challenging. So for us, for growers, for, you know, everyone in the supply chain space, it’s just like I said a lot of guesswork, which is not where you want to be from a business owner standpoint. You know, you don’t want to be making what feels like uneducated guesses a lot of the time.

Ryssdal: Another risk question, of course, has to be how you’re taking care of workers and your suppliers. I mean, because the virus is still out there. I don’t know what it’s like in Ecuador, but I can’t imagine it’s great.

Stembel: Yeah, so actually — I actually contracted the virus myself personally, and it was really bad. It lasted about six weeks and there were moments where I didn’t know if I was going to make it. It was really, really hard. And I can’t say I’m grateful for having it because it was really hard, but I’m grateful for what I learned from it. Because I had COVID and went through it, and saw what it could do — you know, the biggest thing I want to do as a business owner is make sure that we’re keeping people safe as possible. So something we implemented was we test all of our employees every two weeks. That’s on our dime, we pay for that fully. And then the second thing we’ve done is make sure that if people are sick with it, that they don’t have to worry about anything except for getting better. So we will pay them for the full amount of time that they’re out. So we’re really trying to do everything we can to make sure that we’re keeping our team safe. And if they, you know, do get sick, that we take care of them while they’re sick as well.

Ryssdal: I’m gonna guess that these policies are informed by you having been whacked by this thing for six weeks, right?

Stembel: Absolutely. Absolutely. I saw how hard it was, and I don’t want anybody to go through that.

Ryssdal: Yeah. Last thing, and then I’ll let you get back to work. Given everything you’ve been through this year, and the prospects for this economy, roll the dice for me. What are you thinking for next year?

Stembel: Yeah, I feel like that’s what we’re doing. We’re rolling this dice totally. You know, I’ve tried to do as much analysis as I can to be as wise as I can going into next year. But really, I have no idea, you know. I don’t know if we’re going to go into a recession. And it makes what I’m doing down here in Ecuador really hard right now. You know, I’m guaranteeing numbers of crops that we’re going to grow. And what if there’s a huge downturn next year, and we still have millions of dollars of crops that we grew for it. So, I don’t know what next year looks like. I have a lot of hope.  I hope that we’re not in a place next year where I’m talking to you and I’m like, ‘Oh my gosh. What are we going to do?”