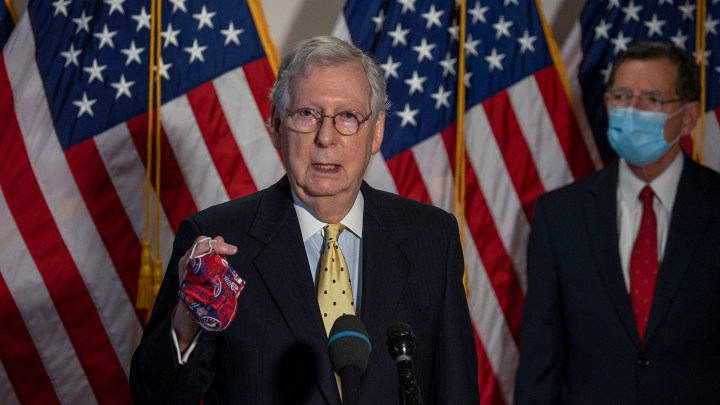 COPY
The unemployment extension for the GOP bill will be based on approximately 70% wage replacement, according to Treasury Secretary Steven Mnuchin. Tasos Katopodis/Getty Images
COVID & Unemployment

The unemployment extension for the GOP bill will be based on approximately 70% wage replacement, according to Treasury Secretary Steven Mnuchin. Tasos Katopodis/Getty Images
Listen Now

Senate Republicans are expected to unveil their $1 trillion coronavirus relief bill Thursday. Congress still hasn’t decided whether to extend the extra $600 a week in supplemental unemployment benefit, which expires at the end of this month.

Marketplace’s Nancy Marshall-Genzer is tracking this news. The following is an edited transcript of her conversation with Marketplace’s Sabri Ben-Achour.

Sabri Ben-Achour: Nancy, are Republicans in favor of extending the extra unemployment?

Nancy Marshall-Genzer: They’ve divided over this. They could offer a temporary extension of the $600 payment. Or they might give unemployed workers a lower weekly supplement — maybe a couple hundred dollars a week.

Ben-Achour: And when do those $600 payments end?

Marshall-Genzer: In a matter of days. Officially they expire on July 31, which is a Friday. Most states pay unemployment for the week ending on a Saturday, not Friday. That means, for most unemployed workers, this is the last week they’ll get the extra $600.

Marshall-Genzer: Some Republicans say the $600 payment is too high and discourages people from looking for a job because they earn more on unemployment than they did when they were working. Treasury Secretary Steven Mnuchin said Thursday on CNBC that unemployment shouldn’t be more than 100% of a worker’s salary:

Mnuchin also said that there won’t be a payroll tax credit in the Republican relief bill. That’s something President Trump was pushing for.