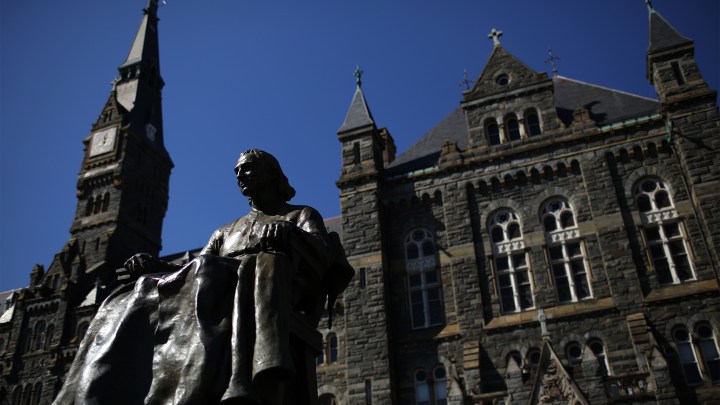 COPY
Georgetown University, above, is one of the U.S. colleges planning on offering hybrid classes in the fall — some in-person and some online. Win McNamee/Getty Images

Georgetown University, above, is one of the U.S. colleges planning on offering hybrid classes in the fall — some in-person and some online. Win McNamee/Getty Images
Listen Now

The Trump administration has announced a new set of immigration guidelines regarding foreign college and graduate students.

Students enrolled in universities that will be teaching online next year must leave the country or transfer to another university that is teaching in-person classes.

It’s a controversial decision partly because tuition from international students is a major financial component of American schools’ budgets.

When Matyas Kohout heard the news, he was confused.

“I’m facing more and more issues that my friends in other countries do not face at all.” He’s from the Czech Republic and is in the United States studying law at Georgetown University. The school is offering a hybrid model — both online and in-person classes —  but as with many schools, that could change depending on the pandemic, leaving Kohout with questions about his visa status.

They are questions many of the over 1 million foreign students in America’s higher education system are asking right now. If their schools are moving instruction entirely online, they can no longer legally stay in the U.S.

Experts say that’s a lot of brain power exiting the country — and a lot of money. International students contributed $41 billion to the U.S. economy in 2019, according to NAFSA, an association of international educators.

Nine percent of colleges surveyed by the Chronicle of Higher Education are planning to operate entirely online; 24% say they’ll do a hybrid model, although, again, that depends on how the pandemic evolves.

International students are being given the option to transfer to a university that is holding in-person classes. But Sarah Spreitzer with the American Council on Education said that isn’t very feasible.

“Even without a global pandemic, you’d have to find a school, apply to that school, be accepted and perhaps even move,” she said.

And colleges worry about students who won’t want to come back after this ordeal. Anderson from the National Foundation for American Policy said that’s a legitimate concern: “When you put up a not-welcome sign, students remember that.”