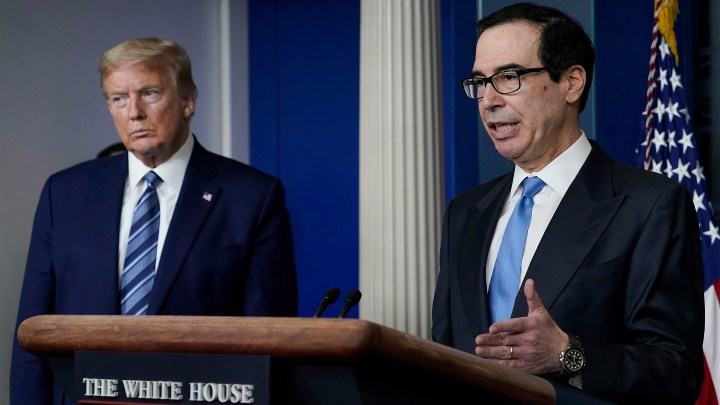 COPY
Treasury Secretary Steven Mnuchin sent a letter to to several finance ministers in Europe asking for a pause in negotiations about a digital tax. Drew Angerer/Getty Images

Treasury Secretary Steven Mnuchin sent a letter to to several finance ministers in Europe asking for a pause in negotiations about a digital tax. Drew Angerer/Getty Images
Listen Now

The Treasury says it’s just asking for a “pause,” but European allies aren’t taking it as just a simple delay. This fight has been simmering for about a year, and this marks an escalation over who has the right to tax tech companies.

To recap what this fight is about: Tech companies — let’s just say Facebook or Dropbox — make money off of users in France or India or Brazil, but they mostly pay taxes in the United States. That’s how the rules work: You’re taxed where you are physically present. But a lot of countries say in a digital world, these rules are unfair, and they want to tax tech companies that make money off their citizens.

“Well, the U.S. perspective is ‘Look, these are the rules we have, we’ve had these rules since the earliest 20th century,'” said Lilian Faulhaber, professor of law at Georgetown University. The fight was put on hold until this issue could get hammered out among 137 countries at the Organization for Economic Cooperation and Development. But now that the U.S. is pausing its participation in that particular negotiation, citing the coronavirus, nothing is going to get hammered out at the OECD right now, at least not with the U.S.

Manal Corwin, a partner at KPMG, said it’s a precarious situation. France, for instance, has said if the United States won’t negotiate, then it’ll go ahead with its digital tax. The U.S. has retaliatory tariffs ready to go. And that fight might get replicated for every country that decides to start taxing Big Tech.

“You end up with, No. 1, uncertainty by companies who are making decisions about investment, the possibility of significant taxation, the possibility that those taxes get passed on to consumers,” Corwin said.

In an election year during a pandemic, the world finds itself yet again in a moment of escalation over trade and taxation.