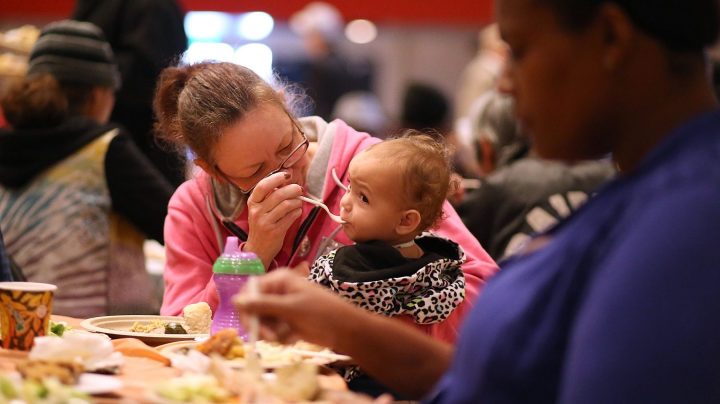 COPY
A woman feeds a baby at a Thanksgiving meal hosted by the Bay Area Rescue Mission in Richmond, California, in 2015. Photo by Justin Sullivan/Getty Images
Shelf Life

A woman feeds a baby at a Thanksgiving meal hosted by the Bay Area Rescue Mission in Richmond, California, in 2015. Photo by Justin Sullivan/Getty Images
Listen Now

The following is an excerpt from Lauren Sandler’s new book “This Is All I Got: A New Mother’s Search for Home,” which follows one woman navigating poverty and the social service system during her first year of motherhood. Click the audio player above to hear Sandler’s conversation with Kai Ryssdal.

Camila held my eye contact as I explained to the group of women in the room that, if they were willing, I wanted to know their stories, to witness their lives. Some of them shrugged. Some of them shook their heads. Some nodded, open to the invitation, if skeptical. But Camila sat up even taller and folded her long fingers over the baby-blue purse resting on her lap. I could feel a light switch on and, with it, her mind revving, her thoughts lurching forward as she composed herself. Her cheeks, pale for Dominican skin, flushed slightly, like heat was building inside her. She waited politely for me to finish and for others in the room to speak. She set her jaw through the awkward silence that followed. And then, perched on the edge of her seat, her sandals firmly on the floor, Camila spoke. She said she had a story to tell.

Here she was now, weeks before giving birth, making plans to stay off welfare and finish her degree in criminal justice. From that first meeting, I sensed that she was a woman who was hell-bent on propelling herself out of this shelter, away from the circumstances of her past, toward something solid, ambitious. But no matter how tall she carried herself, her feet remained anchored in a place she didn’t want to be. She was born into struggle and deeply tethered there.

As I came to experience her, within and beyond her story, one thing was clear to me: If Camila couldn’t use her wits and persistence to make the system work for her, no one could.

I was at the shelter where Camila was temporarily living because I wanted to witness and understand how deepening inequality is lived in America, and particularly in New York, a city that gets richer as the poor get poorer. This city is a fun-house mirror of national inequality, displaying class differences in their most exaggerated forms. At the shelter, I met women whose backgrounds varied but who all had nowhere to go when they showed up with their bags, and nowhere to go when they packed them once it was time to leave.

Data can tell us who is on welfare, sure. But it doesn’t tell us that a person becomes synonymous with welfare, is defined by it, a life’s narrative distilled into a number, devoid of humanity, of individuality.

I first moved to the city in 1992, when homelessness was considered a national crisis. The night I unpacked my bags, 23,482 people slept in the city’s public shelters. By the evening I met Camila in 2015, that number had ballooned to over sixty thousand people in the city’s mainstream shelters, where in total, that year, over 127,000 people spent at least a night. That year, thousands more were housed in specialized shelters for domestic violence survivors, homeless youth, or people with HIV/AIDS. And thousands more, housed in hotel rooms or dilapidated apartments awaiting an eligibility determination for Temporary Housing Assistance, were denied ongoing aid. On the streets, in parks, on subway trains, over sidewalk vents, thousands more tried to find comfort on a strip of cardboard, a bag stuffed with whatever could be carried or scrounged.

A crisis of far greater magnitude is growing.

Homeless: What word more obliterates the nuances and trials of complicated relationships, of ambitions, of plans? It means failure rather than perseverance; homelessness as an end, even at a young age. But the homelessness crisis is a single lens in the kaleidoscope of American poverty—more specifically the catastrophe of urban American poverty, and even more specifically the poverty of women in urban America. The story of every person who has found themselves homeless, or in a place of serious housing instability, is individual, and yet each story is its own keyhole view of this country’s deepest flaws: the vanishing safety net, the scourge of housing inequality, the yoke of which family you’re born into, the stubbornness of entrenched racism, and the burdens that women are forced to carry utterly alone.

Theoretically, poverty doesn’t discriminate. There’s no doubt that it’s hard being a man in poverty, but most don’t do it as single parents. Among developed countries, no nation fails its single mothers as gravely as does the United States. Here, they receive paltry social income support, the fewest early-childhood education and care options, minimal paid family leave and healthcare. More single mothers work in the United States than in other countries, but they are still impoverished by egregiously unequal low wages. Only one- third collect child support. No wonder single mothers make up the vast majority of our homeless population—whether we see them sleeping on the street or not.

This is information that any concerned citizen can find with a quick Internet search. But the data doesn’t tell the whole story. We encounter so few stories about the homeless who apply lipstick, change a diaper, and go to work, or to class, or to the infinite linoleum-floored fluorescent-lit waiting rooms of our failing social-services system. Data can tell us who is on welfare, sure. But it doesn’t tell us that a person becomes synonymous with welfare, is defined by it, a life’s narrative distilled into a number, devoid of humanity, of individuality.

Poverty, on a day-to-day, hour-to-hour basis, is often numbingly boring. Hours spent in waiting rooms, just to learn an appointment has been canceled, and having to feel time slow in the same space again the next day. Evenings after shelter curfew, alone in a room with a sleeping baby. Miles of subway tracks followed from one remote neighborhood to another, searching for resources and information. This was a life that was familiar to Camila long before she arrived at the shelter where I met her. It was her mother’s childhood. It was her own childhood. Now it was to be her child’s childhood.

Homelessness is a crisis about housing, first and foremost. And housing in our age is about the inheritance of our families: how they care for or abuse us, how they uplift or resent us, how they can or can’t—or will or won’t—help us. It’s the story of children and their parents. In poverty, where single-parent families are the norm, it’s the story of children and mothers—and the nagging elusiveness of participatory and responsible fatherhood. Her mother delivered her a life of impossible circumstances. But Camila was determined to disrupt that cycle, to pass down a different fate.

What would it take?

Picture yourself at twenty-two with no margin for error. Picture yourself shouldering the stress of caring for an infant while attempting to navigate the system, utterly on your own. Picture facing such anxiety and fear with only your baby’s cries as a partner.

Each of the women I met ended up at the shelter via a different path. One had a drug-addicted mother who couldn’t take her in. One had witnessed the violent death of every close member of her family in the United States. One had parents who could no longer live with her mental illness, who perhaps saw her pregnancy as a last straw. One was evicted. In most of these cases, their babies’ fathers said they’d stick around at the beginning, only to fade away by the birth. They all have harrowing, meaningful stories to tell, as do the millions of other women in their circumstances. But among them, Camila demonstrated a level of determination and resourcefulness that signaled that she might be able to find her way through the labyrinth to make a future on the other side. I wanted to see if she could.