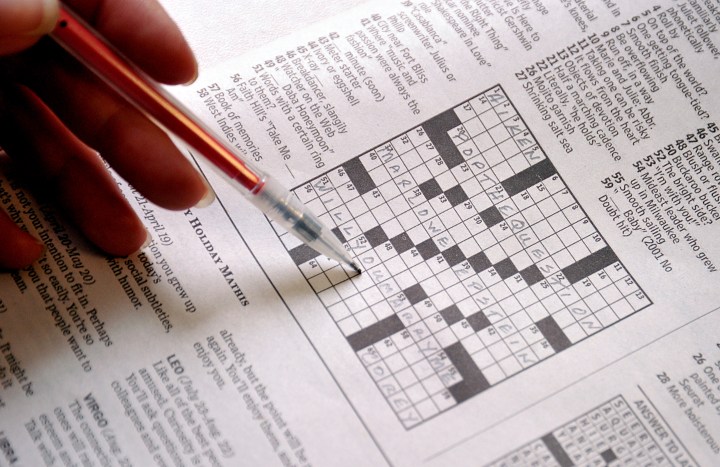 The following is an excerpt from Adrienne Raphel’s new book “Thinking Inside the Box: Adventures with Crosswords and the Puzzling People Who Can’t Live Without Them.” When the crossword puzzle first appeared in an American newspaper in 1913, hysteria followed, and it became a cultural force that still thrives today. While The New York Times is now the behemoth for puzzle enthusiasts, Raphel explains why it took the paper decades, and a global crisis, to finally publish one.

On November 7, 1924, seven months after Simon & Schuster had published its first crossword collection, the New York Times ran two editorial columns side by side. The first described the Bolshevist Russian concept of “economic espionage,” or the knowledge at any time in one’s life of precepts other than those espoused by the Communist Party. The second, “A Familiar Form of Madness,” painted a slightly different form of economic psychological danger. “Scarcely recovered from the form of temporary madness that made so many people pay enormous prices for mahjong sets,” the Times reported, “about the same persons now are committing the same sinful waste in the utterly futile finding of words the letter of which will fit into a prearranged pattern, more or less complex.”

Although nearly every major metropolitan newspaper had embraced the crossword by the mid-1920s, the Times staunchly refused. Over the next several years, the Times persisted in declaring the crossword dead. In March 1925, the paper proclaimed, “Fortunately, the  question  of  whether  the  puzzles are beneficial or harmful is in no urgent need of an answer. The craze evidently is dying out fast and in a few months it will be forgotten.” By 1929, the Times was still trying to quash the crossword: “The cross-word puzzle, it seems, has gone the way of all fads,” claimed an article titled “All About the Insidious Game of Anagrams.”

Readers assured the Times that the crossword was still highly relevant. In a letter to the editor from Friday, February 1, 1930, the inaugural date of the Times of London’s crossword puzzle, a Richard H. Tingley of Port Chester, New York, writes, “From the viewpoint of one who has constructed and published more than 2,000 of these mental teasers, and is still making them at the rate of seven a week, I can assure you that there is little warrant for your editorial assumption that their end is near. The craze — the fad — stage has passed, but there are still people numbering into the millions who look for their daily cross- word puzzle as regularly as for the weather predictions, and who would be sorely disappointed should the supply be cut off.” Tingley’s argument was hardly unbiased, but he also was on to something. The puzzle had gone mainstream; the crossword had settled from its mad- cap youth into a comfortable position as a staple ritual of the leisure class. By 1941, the Times was the last major metropolitan daily news- paper in America that didn’t offer a crossword puzzle.

On the morning of December 7, 1941, the Japanese Navy Air Service launched its military strike against the U.S. naval base at Pearl Harbor in Hawaii. On December 18, 1941, Lester Markel, the Sunday editor of the Times, sent a memo to its publisher, Arthur Hays Sulzberger: “We ought to proceed with the puzzle, especially in view of the fact it is possible there will now be bleak blackout hours—or if not that then certainly a need for relaxation of some kind or other.” Sulzberger hardly needed to be convinced. A surreptitious crossword addict, he’d taken to buying the rival New York Herald Tribune in secret to devour its puzzle. Sulzberger justified the addition of the crossword for the comfort of his readers, but he made the call based on the bottom line. Why skulk in stealth to pay competitors when you could print the money yourself?

Attached to the memo was a note from Margaret Farrar, a crossword puzzle editor, addressed directly to Sulzberger. “I don’t think I have to sell you on the increased demand for this type of pastime in an increasingly worried world,” she wrote. “You can’t think of your troubles while solving a crossword.”

If the Times was going to have a puzzle, it was going to take that puzzle seriously. Whether or not Farrar had sent that memo to insinuate that she knew just the woman to help usher the puzzle into the Times, it worked; the Times hired Farrar as its crossword editor,  and on February 15, 1942, the paper’s first puzzle appeared.

“I don’t think I have to sell you on the increased demand for this type of pastime in an increasingly worried world. You can’t think of your troubles while solving a crossword.”

The Times heralded the occasion with a scrupulous lack of fanfare, more funereal than FUN: “Beginning today,” it announced, “The New York Times inaugurates a puzzle page. There will be two puzzles each Sunday—one with a flavor of current events and general information, and one varied in theme, ranging from puzzles in a lighter vein, like today’s smaller one, to diagramless puzzles of a general nature.” The Times would not lower itself to the status of cheap diversion. If the Times was going to embrace the crossword, it would create the nation’s premier crossword.

The main crossword each week, with its “flavor of current events,” was more closely related to a social studies pop quiz than to the giraffe riddles and quackery advertisements around the World’s crossword. The first Sunday Times crossword, by Charles Erlenkotter and titled “Headlines and Footnotes,” was a twenty-three-by-twenty-three grid—an unusual size, since the Sunday puzzle would soon come to be standardized at twenty-one by twenty-one—and the average word length was 5.36; there were fourteen nine-letter answers, which were the longest entries. The clues were dry, more dictionary than whimsy, and had a militaristic bent: “Famous one-eyed general” (WAVELL); “Flier lost in Pacific, 1937” (AMELIA); “Native Hindu in a British Army” (SEPOY). Though the puzzle was conceived as an antidote to the news, this was an escape within the paper, not an escapist fantasy. For the crossword to sustain itself as a ritual that would appeal to Times readers, the crossword had to appeal to its loyal customers, and so it made sense for the puzzle to match the style and substance of the rest of the paper.

From Thinking Inside the Box: Adventures with Crosswords and the Puzzling People Who Can’t Live Without Them by Adrienne Raphel. Copyright © 2020 by Adrienne Raphel. Published by Penguin Press, an imprint and division of Penguin Random House LLC. All rights reserved. 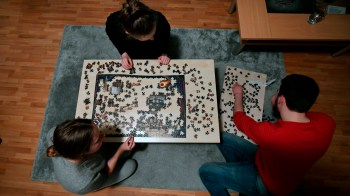