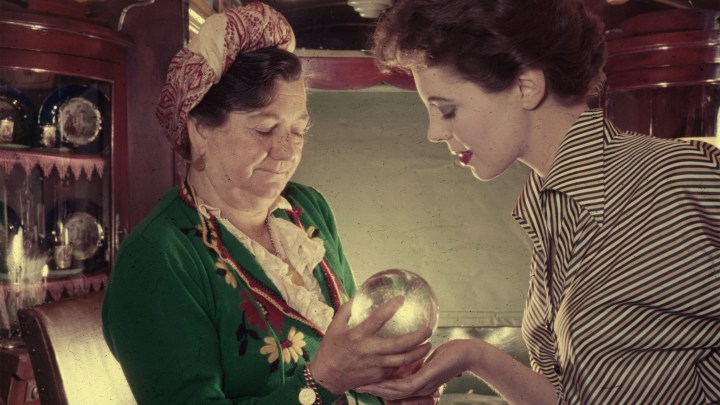 Michael Cardenas treks down to the San Diego River with honey, flowers and Champagne in tow. He leaves these offerings for a love spell on the riverbed and checks with the Spirit to make sure they’ve accepted it. Then he goes back home where he does most of his actual spellwork, and leaves another offering on the altar of his client.

“Then every single day for 14 to 21 days, I’m going to go, I’m going to do energy work around it. It’s intense,” Cardenas said. He’s a professional witch and has been practicing for more than 15 years. Cardenas owns Olde Ways in San Diego, California, where he offers spellwork and tarot readings. He’s part of a growing trend of “new age beliefs” — things like psychic readings, astrology and tarot. In the past few years, the occult has become more popular, especially on social media, and with apps like Co-Star.

Cardenas documents how the offerings on the altar are doing, and meditates on it for an hour each day. Sometimes, he has to contact his client and tell them to do something like a spiritual bath. He divines with the Spirit and determines where the offerings are to be left.

The “psychic services” industry is worth $2 billion in the U.S., and Cardenas is just a small part of that. He charges $85 for a 40 minute tarot reading, $55 for a spell consultation and anywhere from $155 to $321 for a spell, which Cardenas says, “is cheap, here in Southern California.”

What was once a crime punished by execution is now a well-established part of mainstream U.S. culture. Witches have gained massive followings — the HoodWitch has over 455,000 followers on Instagram alone — and in some places “What’s your astrology sign?” is as common a question as “What do you do for a living?” The occult isn’t something scary or fringe anymore, it’s part of our children’s entertainment in books like “Harry Potter” and movies like “Halloweentown.”

“The increase in salience of tarot and astrology is definitely tied to consumer trends,” said Joseph Blankholm, a professor of religious studies at the University of California, Santa Barbara.

The rise of wellness culture and the “occult” — tarot, astrology, psychic services, reiki and more — go hand in hand, Blankholm said. The fact that the occult can be personalized also fits in well with the “on-the-go” nature of U.S. culture. Because so many Americans have moved for school or better jobs, Blankholm said, spirituality has adapted to “fit better within our economy.”

“As you’re displaced, your communities become really spread out, you’re not as attached to strong social institutions — which may have been religion in the past.” Blankholm explained. The ways in which we live have become more individualized, he continued, and if there’s something like the occult that allows you to take bits and pieces from it, that makes sense.

That can mean pulling multiple religious or spiritual practices together to create your own.

Angie Thurston, co-founder of Sacred Design Lab and a ministry innovation fellow at Harvard Divinity School, calls this a “choose your own adventure approach.” Thurston said a lot of Americans, especially those under 35, are not only religiously unaffiliated today, but were also raised outside any organized religion.

This leads to them being “responsible for cobbling together a spiritual life without necessarily even having something to either draw upon or reject from their own upbringing,” Thurston said. In turn, Thurston said a lot of people look for what seems ancestral, ancient and rooted, which might be tied to geography, race or country of origin.

“These practices can be something that people draw upon as a result of going looking for something that feels like either theirs or that has allowed people to tap into something deep,” she said.

“Often during times of political turmoil, people turn to witchcraft and alternative spirituality,” said Pam Grossman, host of “The Witch Wave” podcast and author of “Waking the Witch: Reflections on Women, Magic and Power.” Witchcraft is a practice that allows people to have autonomy and a sense of agency over their circumstances, Grossman said.

But the practice also ties in well with the American consumerist mindset.

“There’s a lot of material culture around witchcraft — things like crystals and tarot cards and T-shirts and tote bags — that people are spending money on now,” Grossman said.

Jenna Locke, an LA-based hairstylist and self-described empath, hasn’t really bought into that part of occulture. But she has spent thousands of dollars over several years on spiritual healers, astrology readings and sessions with her shaman.

“Just like with anything in life, you get what you pay for,” Locke said. “Money is an exchange of energy, so I respect people who charge a lot of money.”

For thousands of years, Cardenas said, witches have been compensated for their services, whether that was offering them a house or livestock or whatever the cultural norm was. At the end of the day, he said he runs a small service-based business. Just like any other business owner, he’s had to learn marketing and branding and has put a lot of his earnings back into growing his business.

And his business has been growing. Cardenas said just a few years ago, people would follow him on Instagram with fake accounts because they didn’t want people to know they believed in the occult. Then it changed.

“They were like, ‘You know what, there’s nothing wrong with what I’m doing here. I’m just trying to cleanse myself, I’m trying to lead a positive life,’” he said.

Grossman said as more people feel scared and marginalized due to politics or forces like climate change, witchcraft will only become more popular.

“The demand is there,” Cardenas said. “And the demand will always be there.”