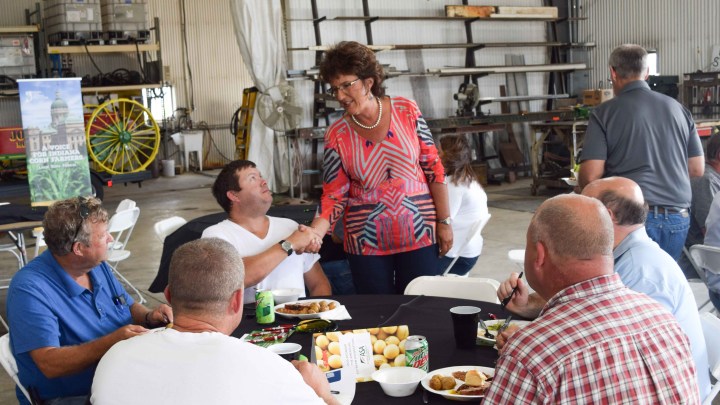 With phase one of the U.S.-China trade agreement set to be signed Wednesday, Indiana’s second Congressional district will be paying close attention to what’s in the deal. A major hub for American manufacturing, many of its businesses have been struggling with the cost of tariffs on Chinese steel and aluminum imposed in March 2018.

Rep. Jackie Walorski, who represents the district, has been monitoring the tariff exclusion process for American companies. She spoke with “Marketplace” host Kai Ryssdal about her thoughts on tomorrow’s deal and the trade war’s impact on her district. The following is an edited transcript of their conversation.

Kai Ryssdal: We had you on 18 months or so ago when this whole thing started. And you were you were not happy. As we sit here on the eve of a phase one deal and with USMCA making its way through the Congress, how are you feeling?

Rep. Jackie Walorski: Well, I think getting USMCA done was a huge victory for all of us, for the American farmer, for manufacturers, and just my district alone, because we lead in exports, and we manufacture all kinds of things. It’s good for Americans, it’s good for my district and I am very, very pleased that this thing is moved through.

Ryssdal: You took the easy part of that answer because I gave you the opening. But let me get you to China, specifically. We’re here on the eve of a deal that … we don’t know what’s in it. You were vociferously opposed to the way it was handled by the Trump administration and by Secretary Ross. Are you satisfied that is going to do well for your district, one of the biggest manufacturing districts in this country?

Walorski: Well, here’s the thing. I still am in the position that China’s gotten away with unfair trade practices for so long. I will tell you this phase one agreement will make progress toward ending China’s most egregious abuses. But it also provides some tariff relief. This is welcome news for us, for my district, for farmers and for manufacturers. But I’m going to be very involved again, with oversight and making sure at every step of the way that this actually works, and that we are bringing the kind of relief that we’re talking about and that we’re holding China responsible. But I do think we’re in the best possible position, having gone through the USMCA process.

Ryssdal: Do you know what’s in the China deal? Have you seen the language?

Walorksi: You know, highlights. We know what the highlights are, but as we found out with USMCA, the devil is in the details. I’ll be 100% engaged in oversight and making sure that these details are understood ahead of time and that we’re involved paving the way, making this fair, again, for American companies and for agriculture, especially.

Walorski: Well, I’ll tell you what. We have been at the switch, making sure that this is fair, that the exclusion processes are fair. And obviously, we also went to the mat for the RV industry, the recreational vehicle industry, that basically is headquartered in our district with thousands and thousands of workers. What we’ve learned through USMCA, the exclusion processes and those kinds of things, has helped us better message and be very, very effective at being able to ask for different kinds of concessions from Secretary Ross. And so, we also –– we as in my office –– are in a stronger position to deal with this, as well.

Ryssdal: How can you be confident in enforcement, and that things are going to turn out the way you want them, when we don’t want to know what’s in it? Other than to have the president and Ambassador Lighthizer say, yes, we’re going to have enforcement capabilities.

Walorski: I’ll tell you again, USMCA was a great example of ‘how do you get to enforcement?’ Well, you know what, as members of Congress you insist on it. Our job is to continue to press for we can, press for accountability and transparency, but also to press and to demand things to be right, fair, and equal treatment with what we see rolling out in this Chinese agreement.