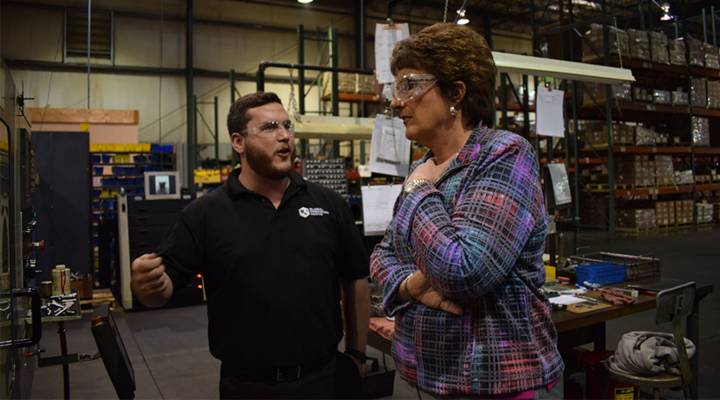 After nearly a year of trade disputes, the United States and China have finally started negotiating a trade deal. This comes after thousands of American companies applied for exclusions from tariffs on imported steel and aluminum, which began the trade war between the world’s largest economies. Many companies are still waiting for the verdict on their exclusion requests, which were slowed down by the recent government shutdown. Rep. Jackie Walorski represents Indiana’s 2nd District, which is full of manufacturers. She talked to Marketplace host Kai Ryssdal about her efforts to keep American business informed on the tariff exemption process. The following is an edited transcript of their conversation.

Kai Ryssdal: Let me first of all get the trade vibe from the Indiana 2nd District. What’s the word from back home?

Jackie Walorski: Well, you know, I think we’ve made some progress, and I think we have a long way to go. You know, I’m going to stay paying attention to every detail here and continuing to fight for fairness when it comes to trade, where we’re going, where we’ve come from and what’s ahead. You know, I support the president, and I think what he’s doing is valid. I just think there’s times when, you know, we’ve got to really make sure that we’re providing the oversight that’s needed in things like holding the Commerce Department’s feet to the fire with exclusion processes and rebuttals and those kinds of things that we’ve been able to accomplish. I do think there have been some bumps along the way, and that’s what we’re paying attention to is if somebody gets in trouble because there’s no supply, they shouldn’t be penalized. We should fix it and move on.

Ryssdal: Let me ask you about the Commerce Department, first of all. There’s a bunch of things I want to talk about, but let’s talk about commerce and the exclusions, that is, the way American companies can get some of the stuff they need if their incoming products are tariffed. You’ve been doing a lot of work on this  — your office has, your chief of staff has. Are you satisfied that, first of all, the exclusion or the exemption process for these tariffs is robust enough, or what’s going on? And how worried are you about these new tariffs conceivably coming on the second of March if the president and President Xi of China don’t come to some kind of deal?

Walorski: Yeah, you know, that’s continued to be an issue. And from the beginning of this, there’s been companies waiting almost 300 days for an answer when they’ve gone through the current process that the Department of Commerce uses. We’ve been involved, my office and myself, in straightening that out and finding a much fairer, clearer, less burdensome way to do this. But, you know, the frustration tends to be growing. And, you know, we’re doing our job and we’re taking information from around the country and really being a mouthpiece for the nation right now, sending out a newsletter for people that really want to dig in the weeds here. And it’s really been an educational piece to help people be able to survive this.

Ryssdal: So, I’ll tell you, we were talking to a guy who was definitely not in your district but a ways away. And he said “I get this email from Congresswoman Walorski’s chief of staff,” and we were like, ‘Oh, we ought to call.’ But look, here’s the deal, ma’am, even though you are a Republican, you say you support the president, your district favors the president, when you go home, are people grabbing you on the street corners saying, “Jackie, what are you doing to us? You’re killing us”?

Walorski: No. So, we have a very open policy when it comes to communication. I have not been bashful. I’m very vocal and very visible about what I believe in working on behalf of the folks that are job creators in my district and really around the country, to say, “You may not have an advocate here, but here’s exactly what’s happening and why it’s important for you, and here’s what we’re going to be doing next,” because we’re trying to bring the mountains down in front of you, and we’re trying to make sure that we don’t lose jobs and that we treat our American companies fairly.

Ryssdal: So, where’s the line, ma’am? If tariffs go up to 25 percent on another couple of hundred billion dollars’ worth of stuff from the Chinese economy, what are you going to do? Where’s your line?

Walorski: Well, I’m going to remain positive right now with ongoing talks between the U.S. and China. I’ll do my part to make sure that we have a long-term resolution. I do believe at the end we will work this out, but we’re going to maintain our vigilance.