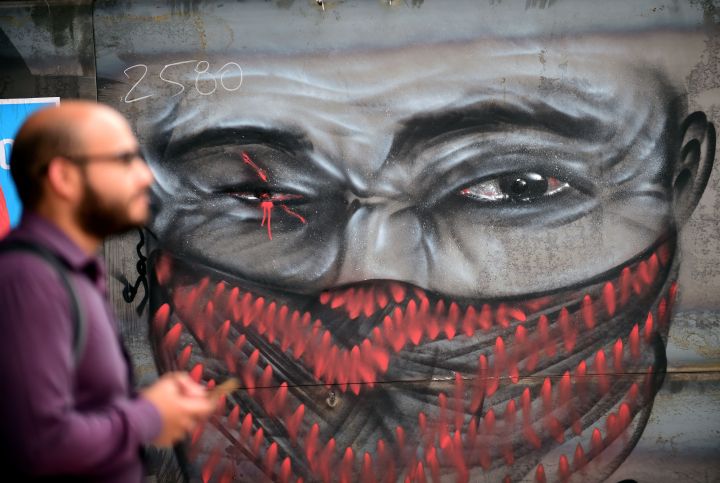 A man walks by graffiti depicting a one-eyed demonstrator -in reference to those injured in recent clashes with police in Chile. Getty Images

A man walks by graffiti depicting a one-eyed demonstrator -in reference to those injured in recent clashes with police in Chile. Getty Images

Protests are raging around the world. While the demands are all different, there are also many common themes.

Here are the views of four people living in very different circumstances in three corners of the globe.

It used to be the color of your ribbon that defined you.

When the pro-democracy protests known as the Umbrella Movement began in 2014, people divided themselves into three camps.

If you wore blue, you supported the Hong Kong government, while pro-democracy supporters became known as “yellow ribbons.”

26-year-old Sher, who did not provide her last name because she did not want to be identified, said she wears her yellow ribbon with pride.

But in today’s world, masks are more common than ribbons as confrontations between protesters and police become increasingly violent.

While Sher, who is a student and part-time tutor, has never resorted to violence, she spends a lot of her time helping other protesters.

“I’ve got some students who were forced to leave home by their parents because they’ve got really different political views. And so I let them stay at my place and offer them food and Wi-Fi because they still have to connect to the world.”

Protesters have made five demands of the Hong Kong government, including universal suffrage and an inquiry into police actions.

While the high cost of living has been blamed for fueling the protests, Sher said a foot on the housing ladder will do nothing to quell protester anger.

“None of the five demands talk about money. We are not talking about housing programs or unemployment issues. We are fighting for our freedom.”

The protests have also caused a rift in Sher’s family. She described her dad as “a red ribbon.” Her mom Stella is more supportive, though she worries about Sher and her brother’s safety.

“I’ve asked them: don’t stay alone at the streets. Life is more important than everything.”

Listen to Sher’s story and the concerns of her mom.

They called it the Chilean miracle.

The economic reforms and wave of privatizations introduced by President Augusto Pinochet in the 1980s have been credited with reducing poverty and boosting growth.

But there were also large social costs.

Chile ranks as one of the most unequal countries among the 36 members of the Organization for Economic Co-operation and Development.

Felipe Hurtado, a 32-year-old filmmaker who lives in the capital, Santiago, said a widening gap between the rich and poor turned anger over an increase in subway fares into the worst civil unrest for decades.

Felipe says Chile is a country where money talks. “The public health system is ridiculous, because people are waiting for two months, eight months, two years for an operation [but] if you have money, you can get anything on the same day. How can be that be possible?”

In response, President Sebastián Piñera has promised to increase pension payments, cut medicine costs for the poor and raise the minimum wage.

The protests have also inspired another revolution — in art. Felipe said many of their demands are sprayed across Santiago.

“The walls of Santiago are now a blackboard of the new ideas that people are demanding from the government.”

While stores have been burned and looted and churches destroyed, Felipe said the protests have also united people.

“When I take pictures I see partnerships between the people. [But also] the devastation of a system that was very blind and very selfish.”

Art has also become a form of protest in Iraq.

Israa Saadi Al Jabouri often goes out with her friends to paint the walls of Baghdad.

The 19-year-old was born in the Iraqi capital, but she said her prospects are grim.

“When we graduate from college after like 16 years of studying and giving our souls into this studying, we have no job. My sister graduated 10 years ago and until now she hasn’t found a job.”

Anti-government protests in Iraq began this October amid high unemployment and anger about corruption and poor public services.

Israa said she has little to lose.

“We are the generation of the nineties and the 2000s. We have suffered from many things — the bombs, ISIS — so we are not afraid of that.”