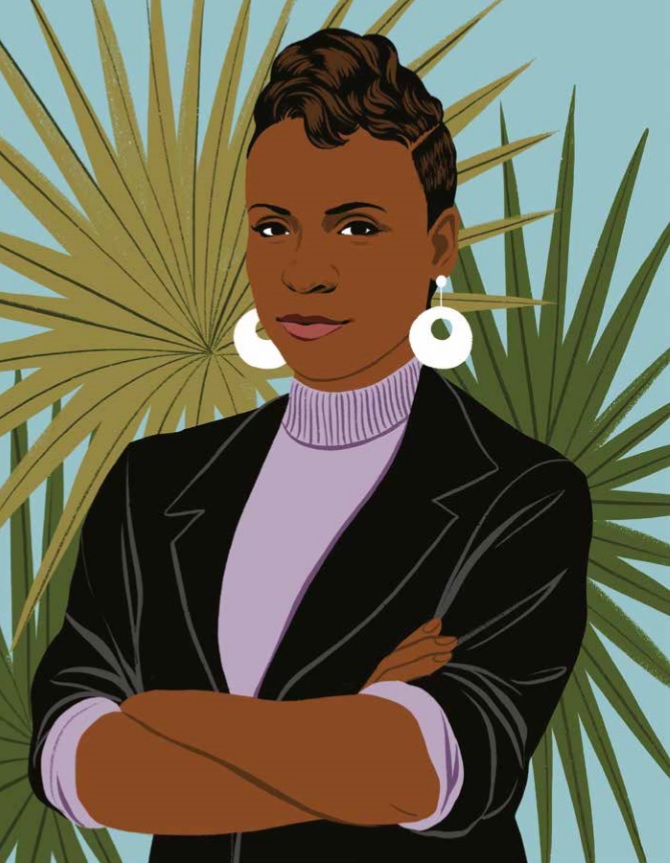 Illustrated by Bijou Karman/Girls Who Run the World
Listen Now

The following is an excerpt from “Girls Who Run the World: 31 CEOS Who Mean Business” by Diana Kapp, illustrated by Bijou Karman. The book features profiles of female CEOs and founders running some of the most interesting and influential companies today.

Founder and chief executive of Blendoor

Her business: A “blind” recruiting app that hides job applicant information (like photo and name) to combat discrimination against women and minorities. The goal is to make hiring fairer, based on merit, not bias.

A weird thing you’ll find on (or in) my desk: An old-school floppy disk that tech media website Recode gave me for being one of the folks they think are awesome.

As a kid, what I wanted to be when I grew up: An Olympic skier

My bedtime: One to three a.m.

A guilty pleasure: Watching documentaries about Serena Williams over and over.

How often I check my bank statement: Twice a month.

Advice I’d give to my 13-year-old self: It’s hard to see the forest for the trees, but in the words of Dory (from “Finding Nemo”), “Just keep swimming, just keep swimming.”

In 2015, Stephanie was attending an entrepreneurship summit at 1600 Pennsylvania Avenue, which, if you don’t know, is the address of the White House. She was invited by President Obama, and on the day he spoke, she listened as if under a spell. He was boasting about the explosion in US tech innovation and all the exceptional young STEM talent. He quipped, “The next Steve Jobs might just be named Stephanie.” Her eyes popped open wide. It was an otherworldly moment. Am I dreaming? she thought. Obama was definitely referring to her (well, she was pretty sure)!

What made that moment even more transformative: The White House is just a few miles from the impoverished southeast DC neighborhood where she had been raised— without a father, by a mother who’d at one point been homeless while pregnant with Stephanie. And yet, here was Stephanie in a room with the president. He’d said her name. Talk about a long journey over a very short distance.

Stephanie has her auntie Greta to thank for the push into tech. Greta was a math wiz who studied computer science and worked at Westinghouse Electric Company. Visiting Greta’s home meant stepping into a thrilling world Stephanie would have no access to otherwise. She saw her first cell phone and CD player there. And most important, she saw a woman, her aunt, who adored her work and traveled the world to satisfy her curiosity.

Founder and CEO of Hint

Her business: Delish, fruity-tasting bottled water made from fruit oils, with zero chemicals or calories. Just added: fruity sunscreen that is oxybenzone-free (bad chemical) and fruity (of course)!

A weird thing you’ll find on (or in) my desk: A pad of paper. When I really have to remember something, I write it on paper and stuff it in my back pocket.

Working on mastering: Me time.

Best part of my job: Developing products and breaking norms in the process.

Advice I’d give to my 13-year-old self: You are smart enough to figure it out.

Kara still can’t believe she works in the beverage industry. She worked in tech forever, most recently as the youngest VP at internet service provider AOL, growing shopping partnerships into a $1 billion business. That was after graduating from Arizona State University and a stint in New York City to work in media. So why water?

It all began with a personal problem. Kara had about fifty pounds of baby weight on her after birthing three kids, and she just couldn’t seem to shed it. She was drowning in ten to twelve cans of Diet Coke daily. And although they helped cut her snacking, she realized the alternative was worse— the chemicals listed on the side of the can read like something she should put in her car engine, Kara said. She had a revelation that she needed to go clean. Plus, she wasn’t losing weight anyway. She needed a health kick, and rule number one is always: Drink more water. Problem was, she hated boring, tasteless water.

She started fiddling with livening up her water by plopping in chunks of fruit. Soon she was boiling fruits to extract their oils and using them to get a fruity taste without pulp or sugar. (Beware: “One time I forgot about it, boiled it to nothing . . . and my stove caught on fire.”) When she did it right, her concoction was surprisingly tasty. The fruity water became her new habit. When she left a batch in the fridge, her kids and husband guzzled it. Her pounds started melting away, and a business idea fizzed up.

Published with permission from Penguin Random House. From Girls Who Run the World: 31 CEOs Who Mean Business. Text copyright © 2019 by Diana Kapp.