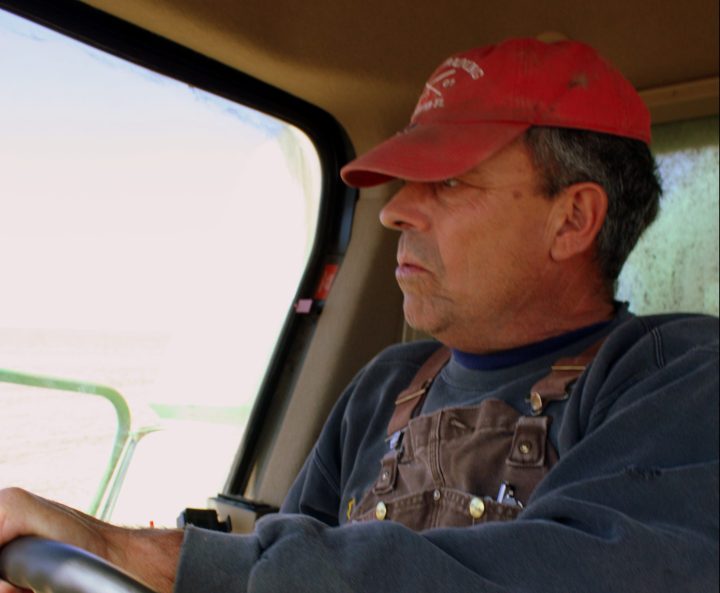 COPY
Blake Hurst on his farm in Atchinson County, MO. Courtesy of Blake Hurst
My Economy

Being a farmer is one of those jobs where you’re always dealing with uncertainty. Over the past few years, the industry has seen lower prices, bad weather and the trade war.

My name is Blake Hurst and I farm in Northwest Missouri. We grow corn and soybeans, and I also serve as president of the Missouri Farm Bureau.
We’re about two weeks into our fall harvest. And it is, without a doubt, my favorite time of the year and the most beautiful time of year, as well. So, I get the opportunity to do a lot of different tasks during the year because of the seasonality of farming. So, just a different job every day and I think that’s what I like the best.
I mean, we really have had a very wet year and harvest is late, it’s delayed. We’re in a rush to get it done before we would normally, you know, expect snow and winter. And so, they’re just a lot of stress and people are feeling that. And then they add that to, you know, just economic stress that we’re feeling because of low prices. So yeah, people are not happy.
As it turns out, of course, the flooding and the excess moisture this summer has supported market prices by cutting production, but we can’t sell as many soybeans. Two years ago, we sold one in three bushels we raised – I mean, “we” meaning U.S agriculture – sold one in three bushels we raised to China. And those sales have essentially gone away. We’re still selling some soybeans to China, but not nearly what we used to. And that’s made the price lower than it would have been otherwise. So, that’s how it affects us.
I mean, we’re an agriculture community. I mean, our town has 1,500 people, our county which is about 5,000 people living here, so very low population, almost all of them dependent on agriculture in some way. They work at the local seed dealership, they worked at the grain elevator, they work at the ethanol plant. All those businesses have seen a drop in revenue and so it just an economic burden on everybody in the community.
Am I going to do some different? I’m 62 years old and don’t know anything better. So, it’s a little bit late. Having said all those things, farming is cyclical. And as I tell my son-in-laws and nephews and stuff – when you put on that free seed corn cap, you know, like they give us? When you started farming, and you know, we’re all excited about your first planning season – you knew that it was your business where some years are good, and some aren’t good. But you know that it will get better. You just ride it out. And try not to be in a financial situation where the next down cycle will put you out of business. That’s the key.