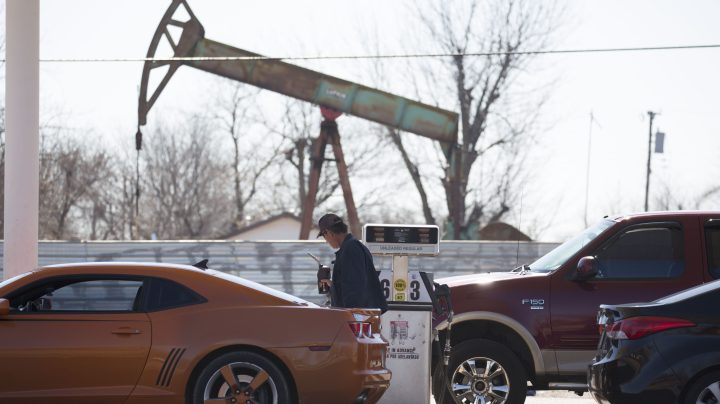 After a drone strike hit the Aramco oil facility in Saudi Arabia in September, the price for a barrel of oil surged by nearly 20%. You may have noticed a spike for gasoline, too. But what exactly determines the price for a gallon of gas?

It all starts with West Texas Intermediate crude oil, which is the standard oil we produce in the United States. WTI sets the market price for crude oil in the U.S. which, on average, makes up roughly 53% of the cost of a gallon of gas, according to U.S. Energy Information Administration. We produce much of our own domestically, but still import from places like Canada, Mexico, Iraq and Saudi Arabia.

“So if we have a shortage in the Middle East, because there was a military event or some other kind of disruption, the price of oil in the United States also goes up,” says Amy Myers Jaffe, senior fellow for energy and the environment at the Council on Foreign Relations.

One term used to describe the relationship between the price of crude oil and gasoline is “rockets and feathers.”

That’s because when an event occurs, gas station owners want to make sure they can afford the next round of gasoline from the refinery. Once the events are settled, their gas prices slowly come down, often based on their competitors prices.

On average, the cost of converting crude into gasoline comes to about 12% of the retail price. Depending on where you live, the formula for gasoline changes according to temperatures or emissions regulations, which can affect the price.

“The standards for gasoline based on the California Air Resources Board’s requirements, make it a more expensive gasoline to refine,” said Tom Seng, director of the School of Energy Economics, Policy and Commerce at the University of Tulsa. “And therefore their prices are almost always higher than the rest of the country.”

The process of getting gasoline from refineries to gas stations accounts for 17% of the cost. This includes the use of pipelines, tankers and trucks. The cost percentage changes depending on how close you are to an oil refinery.

Add in your national, state and local gas tax for, on average, 18% of the total cost of a gallon of gasoline. California has the highest, at 47 cents per gallon, while Alaska comes in with the lowest, at 14 cents per gallon.

Let us know what you want explained next: