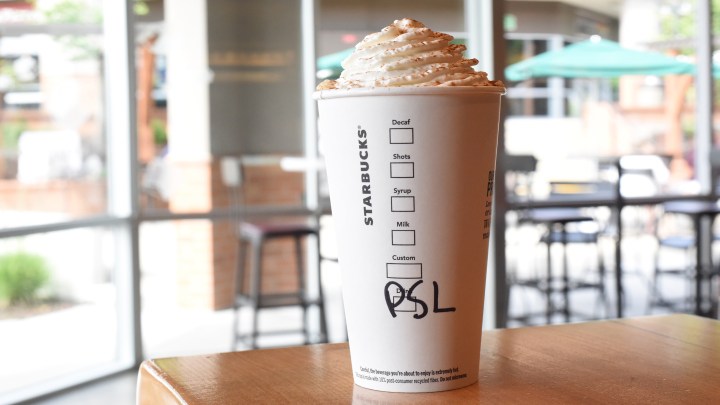 The drink people either love, or love to hate. Courtesy of Starbucks
By The Numbers

The drink people either love, or love to hate. Courtesy of Starbucks

The omnipotence of Starbucks has come to define culture in a multitude of ways. This time, the coffee giant is using its power to redefine the seasons.

“The NEW first day of fall is … today! It’s officially PSL season!” Starbucks declared on its Instagram on Aug. 27 — practically four weeks before the actual first day of fall. The post garnered over 7,000 comments with many praising the return of their favorite fall drink.

But, not everyone is jazzed about the hype the PSL receives.

Regardless, in this 16th year of our lord, the PSL, let’s do the numbers.

The Pumpkin Spice Latte as we know it was conceived in 2003 by a team at the company’s “Liquid Lab.” Peter Dukes, director of espresso Americas for Starbucks, led the team that created what would become Starbucks’ most “popular seasonal beverage of all time.”

“Pumpkin Spice Latte has become more than just a beverage,” Dukes said in a 2014 post on Starbucks’ site about the history of the drink. “It has become a harbinger of the season.”

It would seem Dukes is right. The drink is now available in 50 countries worldwide, and CNBC reports that an estimated 424 million have been sold. The drink starts out at about $4, but prices vary by region. A 2018 Mic article estimates that the PSL has brought in approximately $1.4 billion in sales since its launch.

The fall drink receives plenty of social media love. Over 500,000 posts on Instagram are tagged with #pumpkinspicelatte, and 1.2 million don the tag #PSL. The drink even has its own verified Twitter account with over 100,000 followers.

The Starbucks PSL has gone through two versions, with a recipe change in 2015 after criticism that the drink didn’t actually include any real pumpkin.

A tall-sized cup of the current recipe has 300 calories, 11 grams of fat, 39 grams of sugar and approximately 75 milligrams of caffeine. In addition to pumpkin, cinnamon, nutmeg and cloves are the main spices in the drink.

And while Starbucks is credited with the pumpkin spice craze, humans have apparently been fascinated with one of the main spices in the drink, nutmeg, for 3,500 years.

The pumpkin spice mania doesn’t end with the support Starbucks’ PSL receives. While it’s nearly impossible to know exactly how many pumpkin-spiced-products there are out there these days, there is certainly an abundance of strange ones.

And in case you’ve been burned by a bad pumpkin spice experience — which seems highly likely — Krispy Kreme is offering a “Pumpkin Spice Purchase Protection” plan. Customers who have “been impacted by the proliferation of pumpkin spice products that don’t make sense” can get a free pumpkin spice donut from Krispy Kreme.

So while it’s not everyone’s jam, it looks like the pumpkin spice life is here to stay.