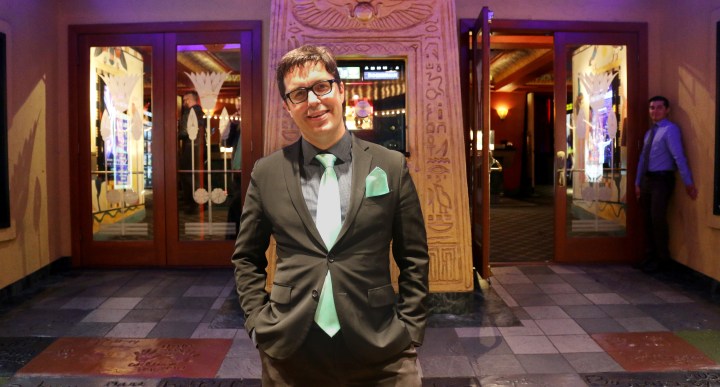 COPY
Craig Hammill, founder of the Secret Movie Club, in front of the Vista Theatre in Los Angeles. Daniel Shin/Marketplace

Summer is nearly here, which means more time by the pool, vacationing with friends and family, and going to the movies. A trip to the movie theater is a routine: You buy your ticket, sit down, watch the film and go home. But that’s not the case at the Secret Movie Club in the Los Feliz neighborhood of Los Angeles. Craig Hammill, founder and organizer of the club, talks about how he built a community of midnight movie enthusiasts.

We introduce the movies and give some trivia about them, and then we encourage people to stay afterwards to talk about them. It really is a conversation. You can’t have a movie without an audience.

Back at [the University of Southern California] when I was an undergraduate, I formed a club called Screenings. And what Screenings did was show movies and bring speakers in. So cut to 20 years. I directed some commercials and webisodes and wrote some scripts. After I got married in 2015, I was trying to make a feature film and it collapsed.

I talked to a lot of my friends who had made features, and they all said 51% of the game is learning about distribution, exhibition, advertising, marketing. Because if you don’t bring an audience to your movie, no one’s going to give you money to make a second movie. And this very quiet voice inside me reminded me of this club that I did at USC, and I thought, “Well, maybe if I could find a movie theater and show movies I love, I would be passionate about it, but I could learn about building an audience, marketing, exhibition, advertising.”

I emailed a lot of theaters around L.A. The one that would work with me was the Vista, which is this beautiful theater built in 1922, single screen in Los Feliz, and the owner, Lance Alspaugh, wrote me back and said, “Hey, we’re willing to let you show movies if you do them at midnight.”

Secret Movie Club has grown because it’s been community oriented, and we just continue to expand. But as we do it, we always try to do it from a place of loving movies and cinema, making sure everybody knows they’re part of the community. There’s no hierarchy, that’s really important to me. Hopefully that community is what we’re building.