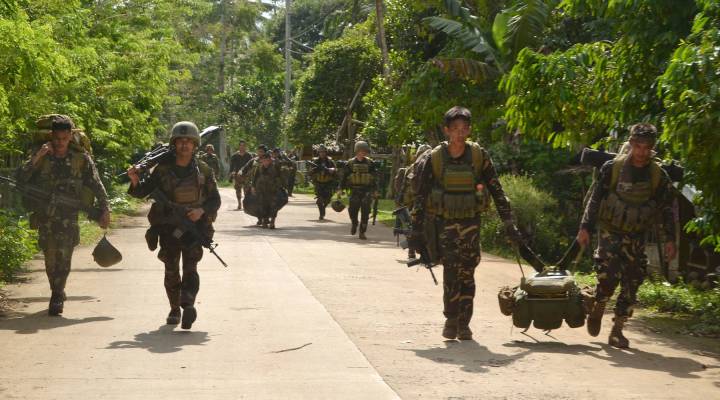 COPY
Philippine soldiers walk along a highway as they return to camp after an armed encouter with members of militant kidnap-for-ransom group, Abu Sayyaf, in the Sulu province on the southern island of Mindanao on August 26, 2016. STRINGER/AFP/Getty Images
Shelf Life

Philippine soldiers walk along a highway as they return to camp after an armed encouter with members of militant kidnap-for-ransom group, Abu Sayyaf, in the Sulu province on the southern island of Mindanao on August 26, 2016. STRINGER/AFP/Getty Images
Listen Now

Kidnappings are plots for thrillers all the time, from “The Transporter” (2002), to “Taken” (2008), to “Kidnap” (2017). The reality is that kidnappings for ransom, or criminal kidnappings, are the stuff of corporate and personal nightmares. They’re also big business. The kidnap-for-ransom market is far more sophisticated than what might be depicted on the big screen. Marketplace host Kai Ryssdal recently spoke with Dr. Anja Shortland, author of: “Kidnap: Inside the Ransom Business.” The following is an edited transcript of their conversation.

Kai Ryssdal: The thrust of this book — which was so fascinating — what we have here is an organically derived governance of a criminal marketplace, right?

Anja Shortland: That’s exactly right. So what we have is a governance structure that helps people who operate normally in the legal economy to contract with people outside the legal economy, i.e. the criminal underworld.

Ryssdal: The key, it seems to me, to this entire thing working are the insurance syndicates, right? The external forces who come in and say: “This is what the boat is worth. This is what the situation is worth. We’re not going to pay more than this…” Without insurance companies, this market, in essence, falls apart.

Shortland: That’s absolutely right. The problem with this particularly tricky trade is that for the family, and for the ship owner, and for the firm, this is a one-off transaction with a counter-party that you don’t trust, that you don’t know, that you know will cheat you. And the only thing that will keep them behaving, and keeping to their promises, is the shadow of the future. The fact that they want to do this again, and again, and again. So you need an infrastructure that collects the information about those counterparties that keep their promises, not punishes the counterparties that go rogue. And that information infrastructure, as you say, has been created by a number of syndicates at Lloyd’s of London, who sell kidnap-for-ransom insurance.

Ryssdal: And it’s only out of Lloyd’s, right? I mean, Lloyd’s is the big name, obviously, in global insurance, and they’re the ones, ain’t nobody else.

Shortland: That is right, but Lloyd’s is a market. So there are about 20 syndicates who are competing for kidnap-for-ransom insurance contracts. They underwrite them in the Lime Street underwriting room, which means that you’ve got a fantastic system for exchanging information, but doing so extremely discreetly.

Ryssdal: When you say “Lime Street underwriting room,” are they all sitting in the same room, these insurers?

Shortland: That is the fascinating thing about this market. That you’ve got a club of people who can cooperate but who will also fiercely compete with each other for business.

Ryssdal: Yeah, that competition thing is interesting. But look, on that subject of information, so these insurance brokers have all this information because they’re sitting next to each other, on the other end of this trade though, right? Because that’s what it is. On the other end of the trade are the kidnappers, the murky, don’t-necessarily-play-by-the-rules, aren’t-going-to-tell-you-what’s-really-going-on kidnappers. So, how do you deal with that information incompleteness and asymmetry?

Shortland: So, if you have kidnap-for-ransom insurance, you get help negotiating a ransom and making that transaction work from very, very experienced crisis responders. And they collate that information that they have, because, ultimately, a lot of these groups do this kind of thing over and over again. So, over time, you know how they behave, you know what their expectations are, you can manage their expectations. That way, rather than having every ransom negotiation completely probing how much a particular person or boat is worth, you establish a ransom sum level, everyone works towards that and that makes it much easier to agree.

Ryssdal: This is going to sound like a crazy thing to say, but the kidnap-for-ransom market actually works. Most of these hostages and the boats, or whatever, they are actually returned, repatriated and go on about their lives.

Shortland: Absolutely. So that was the big puzzle that motivated my research, that if you’re insured for kidnap for ransom, then 97.5% of hostages come back alive. How can that possibly be, given how fiendishly tricky it is to interact with a criminal counterparty? So, that was my starting point: How does it work? And I look at these processes, these institutions, all these agencies that tie up every loose end that there is in this fiendishly tricky process, to make sure that people come back alive.