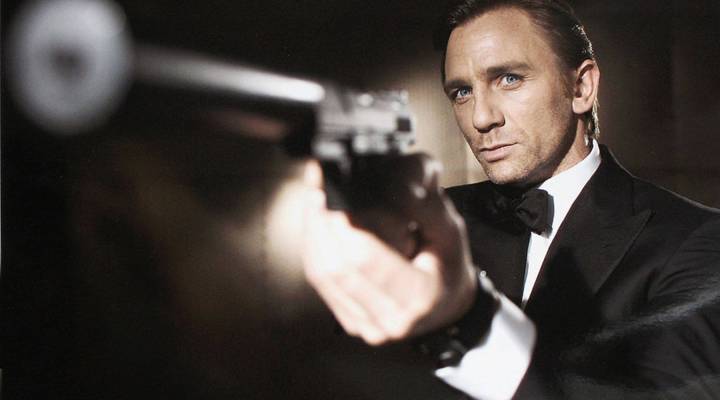 In this undated photo from Eon Productions, actor Daniel Craig poses as James Bond. Greg Williams/Eon Productions via Getty Images
By The Numbers

Mr. Bond, James Bond, is back. Or at least, he’ll be back soon enough.

At a press event Thursday, the cast and crew for the still unnamed 25th Bond film gathered in Jamaica for a Twitter livestream event to discuss the film. Actor Rami Malek of “Bohemian Rhapsody” and “Mr. Robot” fame is slated to play the villain in the new film.

While we wait for the release of the new film, or at least the title of the movie, how about we do numbers on the James Bond film franchise?

The titular role of James Bond has been filled by six different actors, including Sean Connery, Roger Moore, Pierce Brosnan and most recently, Daniel Craig. Connery has portrayed Bond the most, appearing in seven movies in the franchise, starting with “Dr. No” in 1962 and ending with “Never Say Never Again” in 1983.

The 24 films produced by Eon Productions and the independently developed “Never Say Never Again,” have raked in over $5 billion at the box office when adjusted for inflation, according to Box Office Mojo.

The single-highest-grossing Bond film when adjusted for inflation is “Thunderball,” which made $675 million at the box office, while “Goldfinger” made $598 million.

James Bond loves to drink. More specifically, he loves martinis that are shaken, not stirred. Throughout the course of the films, Bond has quaffed 27 martinis on screen, according to a thread on the r/movies subreddit.

How much would it cost to live the lavish Bond lifestyle? His apartment in Chelsea, an affluent London neighborhood, would cost around 800,000 pounds, or about $1.2 million, according to CNBC’s estimate.

But what about his salary? Although Bond’s job “doesn’t really exist” according to a spokesperson for the United Kingdom Foreign Commonwealth Office, it’s estimated he would earn a maximum of 68,539 pounds,or $104,800, a year.

He also rolls in style. Over the course of the series, Bond has driven a number of high-end cars, including a Bentley, a Jaguar, and a number of Aston Martins; the latter brand has appeared in 11 James Bond films.

In 2018, the company announced it would recreate the Aston Martin D85, fitted with high-tech gadgets seen in the film, available to “25 very lucky customers.” Expected to be delivered some time in 2020, the cars sold for 2.75 million pounds each, plus taxes, of course.

Other Bond themes have had commercial success. Duran Duran’s “A View to a Kill” from the movie by the same name hit the coveted No. 1 spot on the Billboard Hot 100, while Carly Simon’s “Nobody Does It Better” from “The Spy Who Loved Me” hit No. 2. Shirley Bassey, who sang three Bond themes, peaked at No. 8 with “Goldfinger.”

How about that plot to contaminate the United States Bullion Depository, also known as Fort Knox, in “Goldfinger”? How much gold would he have rendered useless? It’s unclear how much gold was present at Fort Knox during the 1960s, but the facility currently holds about 147.3 million fine troy ounces of gold, worth about about $6.2 billion.

Film-to-video game adaptations don’t have the best reputation, but 1997’s “GoldenEye 007” is often cited as one of the most influential first-person shooter games released. A version of the Nintendo 64 game in new condition is offered for $664 on Ebay.