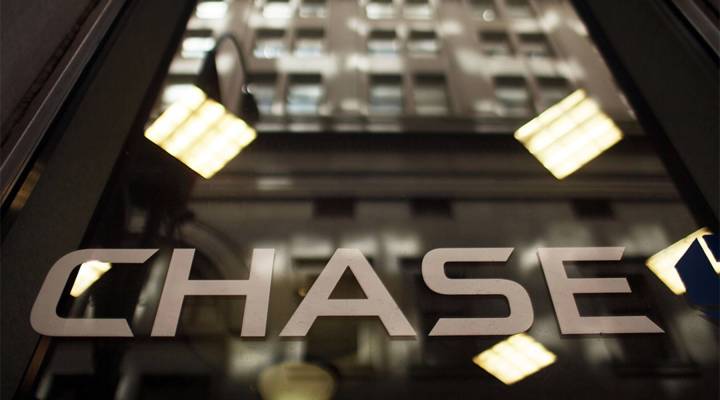 Federal regulators have allowed JPMorgan Chase into the Washington, D.C. market. Chase opened its first branch in D.C. last fall, trying hard to make it young and hip. It’s more hotel lobby than traditional bank branch, with lots of modern furniture and lighting. The only two teller windows are hidden behind sliding doors. Jonerik Wilson is the branch manager and he says around two-thirds of the branch’s customers are millennials. Like himself.

“They can relax on the couches, they can plug into the chargers on the tabletops,” he said. “This is the space that’s most comfortable for that.” Wilson points to what’s known as the “family room.” There are also so-called “restaurant booths” along the side wall, where customers can get financial advice. Wilson is wearing the branch uniform — jeans, a button-down shirt, and a nametag that says, “I’m saving for a house.” He says this is designed to make talking about money less stressful for young customers.

“We want them to be able to come in when they need advice, and we want to be there to help them grow and be a part of their financial journey,” he said. Chase, and every other traditional bank, wants to get more customers. But here’s what they’re up against: a whole generation of people like Rahshae Elamin. Elamin, who’s 34, came into the Chase branch to replace a lost ATM card. Otherwise? She does her banking online.

That conversation used to be a lot easier. Nancy Koehn at the Harvard Business School says that conversation used to start right out of school, or with a first job. It went like this: “Here’s your credit card,” she said. “Would you like us to help you refinance your student loan? Would you like us to help you think about planning for your retirement?”

Banks are now up against much stiffer competition from online lenders. Personal loans made by traditional banks dropped by about a third in the past five years, in part because more consumers were turning to online banks. That’s according to a TransUnion study. But flashy new branches in key locations might give the big national banks an edge.

“Making sure that you have some locations that are in kind of marquee locations around town, where you’re able to kind of build and burnish your brand,” said Andrew Hovet of Novantas, a marketing firm for big banks.

Chase plans to open up to 70 new branches in the Washington region. Wells Fargo, which has the most branches in D.C., says they’ve all been remodeled. Capital One Bank recently opened one of its cafes in Washington — it serves Peet’s coffee and has charging stations and tables for two. Capital One says it will open a second cafe in Georgetown, just a couple of doors down from a branch Chase is now building. I nabbed 29-year-old Adam Steel on the sidewalk outside and asked if the couch-and-coffee approach appealed to him.

“I think I would go and use the charging station,” he said, shrugging. Steel says he does like the idea of interacting with someone face to face at a bank. But unless his phone battery is dying, Steel would rather go to a traditional bank branch. He’s more comfortable with an old-fashioned loan officer than a roving associate in jeans. Perhaps that’s because of his general mistrust of banks — he came of age during the financial crisis. “Many of my friends endured hardship,” he said. “They had to take on tremendous amounts of student loans. My own father lost his job during the financial crisis.”

Still, a bank is a bank. And its biggest draw is the perks on its credit cards, or the higher interest rates on its savings accounts.  That’s what really matters to Steel. He’s a Capital One customer because it offered him the best interest rate. If banks don’t have that, all the throw pillows and charging stations in the world won’t help them compete for customers like him.