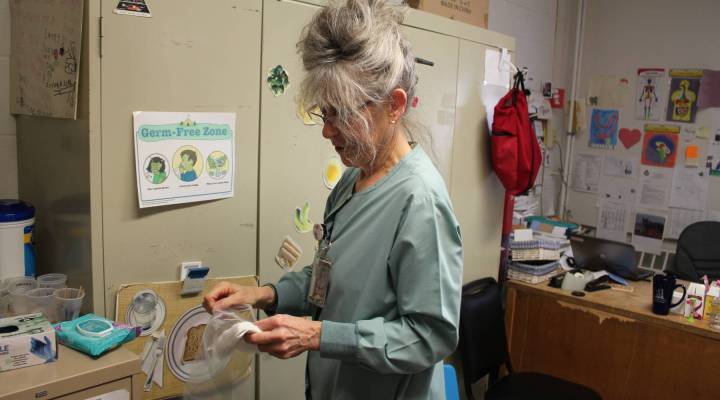 The kids begin flowing into nurse Maxine Pare’s office early in the morning at Etna-Dixmont Elementary School in Penobscot County, Maine. The students are dealing with all kinds of illnesses, from nausea and rashes to nose bleeds.

Pare is only at the rural school two days a week. She works at two other schools the rest of the time, meaning she has a lot to do in just a few hours.

“You have these kids who have crises,” Pare said. “Whether it’s a mental health crisis, and they take meds to help manage that. And they have a lot of difficulties and challenges at home. They don’t have food. They don’t have heat. They don’t where they’re going to be. They don’t know who’s going be there when they get home.” The school is dozens of miles from most medical services, making the nurse’s office often feel like a little emergency room, Pare said.

Nina Fekaris, the president of the National Association of School Nurses, said the job isn’t what much of the public imagines. “I think the average person thinks that the school nurse is someone who sits in a little office, puts band-aids on boo-boos when kids come in with scraped knees from the playground. Maybe an ice pack. Gives them a hug,” Fekaris said.

She said that’s not the case today. According to the CDC, rates of diseases like diabetes and epilepsy have surged in children over the past few decades. Mental health needs have increased. Despite this, a 2018 study in the Journal of School Nursing found that fewer than 40 percent of schools employ full-time school nurses.

“We’re often on our cell phones, talking to secretaries and school staff about issues and crises that are happening at the school,” Fekaris said. “So we’re kind of trying to triage over the telephone.”

Organizations like the American Academy of Pediatrics have advocated for full-time nurses in every school. In Maine, the burden is particularly heavy in rural and high-poverty areas. There’s also a state-wide nursing shortage that’s projected to grow to 3,000 nurses by 2025.

University of Maine nursing professor, Kelley Strout, says some parts of the state with the worst health outcomes often have the fewest school nurses. Strout describes one tiny, coastal school district near the Canadian border, where a nurse covers seven school buildings — and only visits each once a month. “The issue is so clear that there’s resource disparity across the state,” Strout said. “But, it’s just, how do you fix it? How do you level it out? Especially when it comes to our health?”

Maxine Pare says it’s a team effort that handles the added burden. Administrative assistants often pick up the slack and distribute medicine. The school also trains everyone from custodians to bus drivers, even some students, on how to administer CPR and first aid. But that can still leave gaps in care.

Schools also have to compete with better-paying institutions. Nationally, the average registered nurse in a hospital made around $72,000 in 2017, while those in schools made about $16,000 less. Superintendent Mike Hammer, who runs a rural district in Maine, says he’s recently seen very few applicants.

Some schools are now looking towards new models they hope will help, like sharing school nurse costs with local hospitals. But so far, those efforts are mostly few and far between, leaving schools to try and fill in the gaps by themselves.