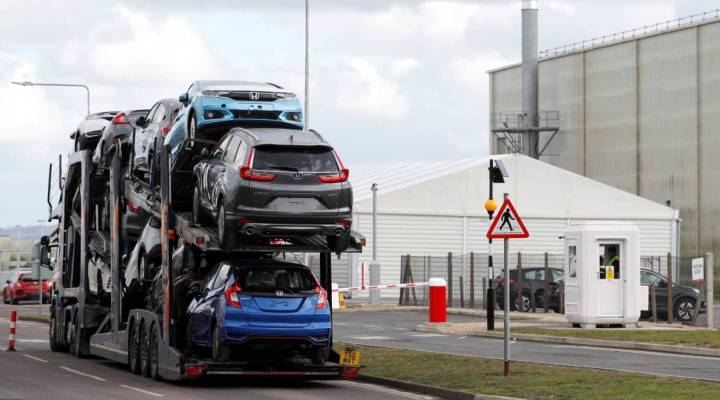 A car transporter loaded with Honda vehicles is driven in to the Honda manufacturing plant in Swindon, southwest England on February 19, 2019. ADRIAN DENNIS/AFP/Getty Images
Brexit

A car transporter loaded with Honda vehicles is driven in to the Honda manufacturing plant in Swindon, southwest England on February 19, 2019. ADRIAN DENNIS/AFP/Getty Images

Britain is still reeling from the recent announcement that the Japanese car giant Honda is closing its factory at Swindon, some 80 miles west of London. Approximately 3,500 jobs will be lost when the plant closes in 2022, and many thousands more could be lost among component suppliers.

Opponents of Brexit say the planned closure is hardly a surprise. The Japanese government warned the U.K. about the potential effect that Britain’s departure from the European Union might have on Japanese companies with subsidiaries there.

Without a trade deal between the U.K. and the EU, the fear is that Japanese exports from Britain into the bloc will face hefty new tariffs, and new border checks could hamper the Japanese companies’ “just-in-time” manufacturing systems that draw on supply chains in continental Europe.

Is Honda backing out of Britain because of Brexit? Alan Tomola of the Unite labor union thinks this is a possibility. “One can’t overlook the impact of Brexit, the uncertainty,” he said last month. “We’re talking, what? Five weeks or so from the deadline date for leaving the EU? And still no deal, no sign of a deal.”

But in an interview with the BBC, Honda executive Ian Howells said the planned closure did not have anything to do with Brexit. “This is not related to that, at all,” he said. “This decision has been made on the basis of changes coming at us globally that we have to now respond to.”

Howells pointed out that Honda is gearing up its electric car manufacturing and needs to concentrate production in Japan, closer to its biggest markets, China and the U.S. At a news conference in Tokyo, Honda’s CEO Takahiro Hachigo repeated that the axing of the Swindon plant “was not informed by Brexit.”

But many observers in the U.K. claim that Brexit is exerting a negative influence on foreign exporters based in Britain, citing a series of recent blows to the U.K. car industry. Jaguar Land Rover is cutting thousands of jobs at its factories. Ford is reviewing its UK plants. And Nissan has announced it will move a new model away from its huge factory in the north of England.

While the global car industry has been buffeted by a series of problems, from the slowdown in China to the pushback against diesel as fuel, British lawmaker Julie Elliott said she had no doubt that Britain’s exit from the EU was also taking a toll. “The uncertainty around Brexit is always a factor now, in any decisions made in manufacturing,” Elliott said.

Compared with its EU counterparts, Britain is still doing reasonably well economically. With unemployment at 4 percent, it’s faring better than most. But Neil Shearing, chief economist with research firm Capital Economics, said that the malign effect of Brexit was visible on closer inspection.

“Business investment is weak, particularly weak,” he said. “Firms are beginning to stop spending. They will now wait until they can see some clarity about what the post-Brexit landscape starts to look like.”