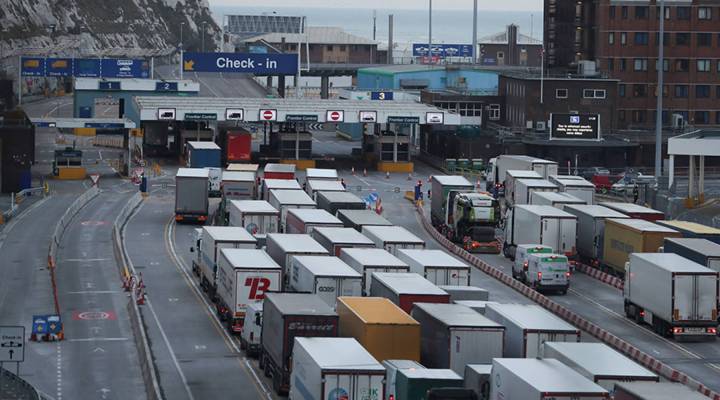 COPY
British exporters and businesses fear that a no-deal Brexit would create massive disruption at ports of entry such as the Port of Dover, above. Daniel Leal-Olivas/AFP/Getty Images

British exporters and businesses fear that a no-deal Brexit would create massive disruption at ports of entry such as the Port of Dover, above. Daniel Leal-Olivas/AFP/Getty Images
Listen Now

The Christmas and New Year holiday has offered only a brief respite for Britain’s beleaguered Prime Minister Theresa May. Before Parliament recessed last month, she suffered weeks of bruising encounters with lawmakers over the issue of Brexit. Now, when Parliament reconvenes in the second week of January, May faces another battering.

She has a week to persuade the House of Commons to approve her deal for exiting the European Union, and it won’t be easy: A majority of lawmakers say they hate her deal.

But the Prime Minister does have one very powerful weapon in her arsenal: If Parliament fails to approve her blueprint, the default position is that Britain may leave the EU at the end of March without any deal at all. For many Brits, that is a terrifying prospect.

It certainly alarms some of the businesses that use the Port of Dover on the southeast coast of England, which handles 17 percent of the traded goods between Britain and continental Europe. Ten thousand trucks a day pass seamlessly through the port with minimal checks under the EU’s customs and single-market rules.

Without a trade deal by Brexit Day — March 29 — most of this traffic would have to be stopped and checked, potentially causing massive disruption and long delays.

“That would be Armageddon for us,” said John James, who runs the port’s largest freight handling company, Star Cargo.

Opponents of Brexit have long warned of such gridlock at the ports. And Brexiteers have long dismissed that as Project Fear. But James insisted this is not Project Fear.

“This is reality, and it frightens all of us,” he said.

That seems to include the United Kingdom government, which has put more than 3,000 troops on standby to ensure the free flow of food and drugs from continental Europe in the event of a no-deal Brexit. It has also ordered the stockpiling of at least a six weeks’ supply of medicines.

“I’ve become the largest buyer of fridges in the world,” Health Secretary Matt Hancock told the BBC in a recent interview. “We are buying and building refrigeration capacity to make sure we have enough storage space for medicines. This is because a ‘no deal’ might happen. Not because I want it to happen. As a responsible government, we have to prepare for every eventuality,” Hancock said.

Many British exporters are aghast at the prospect of a no-deal scenario. Farmers have joined the chorus of disapproval. Without a deal, livestock producers face tariffs of up to 30 percent on some of the produce they sell to continental Europe. The National Farmers Union described no deal as “a complete catastrophe.”

Amid chaotic scenes in Parliament, the leader of the opposition, Jeremy Corbyn, echoed that sentiment, saying that no deal would be “a disaster which no responsible government would ever allow.”

Most lawmakers agree, but hardline Brexiteers do not.

John Longworth of the campaign group Leave Means Leave said the U.K. government should have prepared for no deal at the outset and followed a basic rule of all business negotiation.

“No business person would ever go into a negotiation without being prepared to walk away from the table,” Longworth told Marketplace, adding that walking away is a credible threat since the EU sells much more to Britain than it buys from the country.

“The U.K. is a huge market for the Germans, the French, the Spanish and other Continental countries,” he said. “We should hold our nerve, leave the EU and then offer the EU a free trade arrangement; it would be very much in their interest to take it.”

But Britain’s five main business organizations dismiss that as dangerous bravado. Fear of crashing out of the EU without a deal is now the dominant emotion in the U.K.