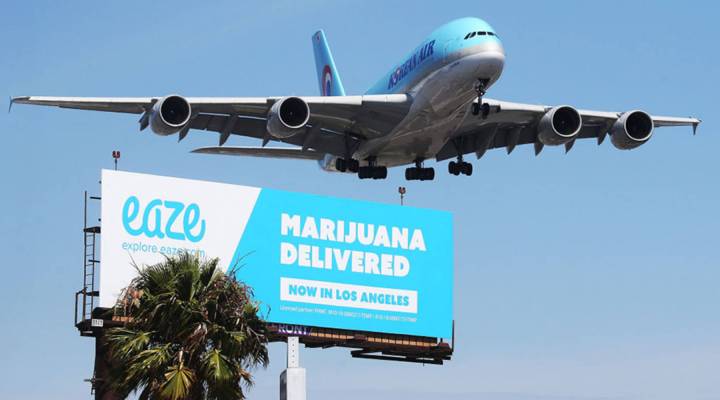 California is now the largest state to legalize recreational marijuana. The Los Angeles area alone is expected to become the largest legal cannabis market in the world, bigger than Northern California, Oregon, Colorado and Washington state combined. That’s opened the door to businesses that provide door-to-door delivery. But a tech platform that makes it easy to order the drug from a smartphone wants in on the action.

On a recent Friday night, a woman who goes by the name Geisha was circling a luxury hotel in downtown Los Angeles. She was looking for a middle-aged woman with long gray hair, capri pants and a pink-and-white checkered top.

“Hi, I’m pulling up in font of the Westin. Where are you standing?” Geisha asked.

She stopped in front of the hotel and ignored the bellhop who was trying to get her to pull forward. The woman she was looking for walked up to the car and handed Geisha a hundred dollar bill.

She handed the woman a white paper bag full of marijuana and drove off.

But now a month later, Geisha, whose real name is Marianne Cotan, is out of a job. The dispensary she worked for, the Downtown Patient Group, suddenly stopped its delivery service. The dispensary would not comment for this story, but the margins for pot delivery are tight. Drivers are not gig workers like they are for Lyft and Uber. State law requires them to be W2 employees making at least minimum wage and getting benefits.

And digital disruption is changing the industry. One of the state’s biggest players in the delivery space is a Silicon Valley startup called Eaze.

“We are at Eaze’s Los Angeles headquarters in Venice Beach,” said David Mack, senior vice president of public affairs. The company’s raised more than $50 million from investors, which helps pay for this office space in a luxurious home once owned by Angelica Houston. Mack pointed out employees sitting behind a wall of giant computer monitors.

“So the orders come through the Eaze platform, the orders then get routed to dispensary partners,” he said.

Once that business receives an order, Eaze software dispatches a driver who is an employee of the dispensary, not Eaze.

“Last count — I asked earlier today — there were approximately 1,200 drivers with dispensaries on the Eaze platform,” he said.

One thing you will never see at Eaze is marijuana. The company does not have a state pot license and never touches the product to stay clear of federal law enforcement.

Mack said Eaze makes money by charging dispensaries a fee and taking a percentage of every sale.

For dispensaries that don’t have a lot of foot traffic, delivery can be crucial. But dispensary owner Jared Kiloh isn’t sold. He met with Eaze and was alarmed by the business agreement they offered.

“So it kind of looked like we will take every part of your business and take no risks because they don’t currently hold a license,” Kiloh said. “It looked like a Trojan horse.”

Kiloh said Eaze only wanted to sell products it endorses and limited his access to customer data.

But other dispensaries see Eaze as an engine for growth.

“You know, back on the early days, it was really just we had two people in the morning, two people in evening,” said Sky Siegel is a manager for Perennial, which now has about 170 part time drivers on its payroll since contracting with Eaze.

“On the average day, we service anywhere from 300 to 400 orders in Los Angeles, and the number is growing every day,” Siegel said.

Now Eaze is lobbying for a new law that would allow drivers to sell products directly from their vehicles, just like an ice cream truck.