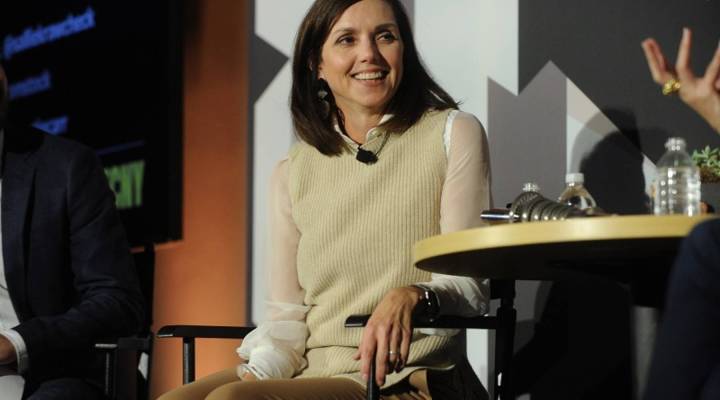 After spending 27 years with General Electric, Beth Comstock knows how to face change. The first woman to serve as vice chair at the company, she guided GE through some of the business world’s most difficult moments of change — breakthroughs, like the development of the internet and social media, and challenges, like the financial crisis and Sept. 11. With a career spent back and forth between GE and NBC, Comstock details these moments in a new book called “Imagine It Forward: Courage, Creativity and the Power of Change.” The following is an edited transcript on her conversation with Marketplace host Kai Ryssdal.

Kai Ryssdal: So, let’s get this out of the way. First of all, why did you leave GE? Was it just time?

Beth Comstock: Well, it was time. But I left sooner than I imagined I would. We had a leadership change, and you know how that goes. New boss, new team and the old team’s got to go.

Ryssdal: She says rather bluntly. You know, when you got to go, you’ve got to go, I guess, right?

Comstock: Yeah, I thought a lot this year about knowing when to exit and how you think about that because I’m all about change, and I think knowing your exit is also something you have to think about.

Ryssdal: Well, so that’s really interesting that you bring that up, because the topic in this book, of change and creativity and all of that, you say yourself in this book that despite all the success you had in your career — I mean, vice chair for GE, for crying out loud — you are not a typical change agent.

Comstock: I’m not. I come to this as an introvert, a reserved person. I hold back. I have an example where I worked in CNN for Ted Turner for a year before he knew my name. And so I’m just not the one that put the ideas out there. And I had to really work to overcome my natural reserve and also some confidence along the way.

Ryssdal: Give me a case study, would you? And let me put the caveat on the answer: You can’t pick one of the big innovative companies that we all know and love, like Facebook or Amazon or Apple, right? Who do you like out there? Who’s doing change and innovation right?

Comstock: I’ve been really intrigued by what I see Walmart doing right now. The digital onslaught comes, they have a million employees, I mean the scale and complexity. They buy Jet, they realize they have to go digital. What I like about their story is they recognize, I think maybe late, but they’ve recognized it, that they have to work with their strengths. What are their strengths? One: They have a lot of employees. Two: They have physical locations. So they’ve been investing more in having people pick up their packages on their way home from work. It’s hard to change from within when you’re a legacy company.

Ryssdal: Well, let me poke you in the eye a little bit and talk about GE, because GE is maybe the granddaddy of legacy companies in this economy, right? And it has, I won’t say fallen on hard times lately, but it’s been undergoing substantial change, not always successfully, it’s not even in the Dow Industrials anymore. I mean, it’s a legacy company that is still trying to make the turn.

Comstock: Yeah, and I mean, GE has fallen out of grace, certainly from the public perception of late. It’s a great company, and I was so proud to work there. I wish people could separate the stock from the company. But it’s also a public company, and so I realize even saying that may be sound a bit naive. But I think people —especially with established companies — I think we underestimate the complexity that happens with scale. The need to keep the core machine running and innovate in the new. It just creates a lot of tension and complexity. And cleaning that up is really hard. And I think we hold our legacy companies to a different standard just because we expect it to be easier. And it’s not.

Ryssdal: So let me ask you actually about taking a risk, and again, an anecdote in the book. Steve Jobs called and said, “Hey, come work for me.” Point of fact, he called twice, right?

Ryssdal: And you said no.

Comstock: You need a big pregnant pause after that, right?

Ryssdal: I know, right? It kind of hangs there. Granted, this was before Apple became what it is today, but it wasn’t all that long ago.

Comstock: Yeah, and I’ll give you just a little bit of context. I was at NBC at that time in a miserable assignment. And I had a lot of reasons to want to leave there. And my gut was this wasn’t the right job for me. I also think I was a bit afraid. And I probably didn’t have the confidence even then that I could make it there. And so, it’s one of those things that, I’ll be honest, I did regret it at times. Especially when their stock price went up, and I’d be like, “What was that?” I remember my husband and I sitting down, and we were like, “How good could that stock ever be?” But I think I just regretted an opportunity maybe to push myself in a new way. But I did it for good reasons, too. I was incredibly loyal to the path I was on. And GE gave me lots of opportunities to grow and be innovative, so I had reasons to also know I could forge a different path where I was, too.