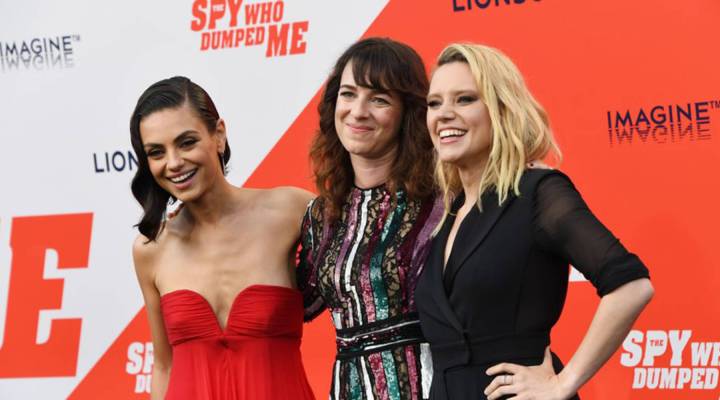 COPY
Actress Mila Kunis, left, writer/director Susanna Fogel and actress Kate McKinnon arrive for the premiere of Lionsgate's “The Spy Who Dumped Me” at the Fox Village Theater in Los Angeles on July 25. MARK RALSTON/AFP/Getty Images

There’s been almost no progress for females on screen in film for over a decade. That’s the message from a report the USC Annenberg Inclusion Initiative released this week on its annual research into inequality in the 100 top grossing films of the prior year. Women are still underrepresented on camera and behind it as well. Of the 109 people who directed a top movie in 2017, just eight of them were women. Even more rare than a female director in Hollywood is a female director doing an action-comedy movie, much less one with female leads. Writer-director Susanna Fogel is doing that though. She talked with Marketplace host Kai Ryssdal about her new movie starring Kate McKinnon and Mila Kunis, “The Spy Who Dumped Me.” The following is an edited transcript of their conversation.

Kai Ryssdal: Tell me why you wanted to make this movie now.

Ryssdal: And ain’t that the way, right? I mean, strike while the iron is hot.

Fogel: You know, the reason is really that I have always wanted to tell stories about friendships. And it used to be that sort of before TV took over what movies used to be in terms of the medium for storytelling, there was a place for friendship stories in the cinema, and now it feels like there is a real binary between sort of awards-drama-type fare that you buy a ticket to and tent poles. And then I think I started to shift my own paradigm about what kinds of stories I could or would want to tell or what was the framework in which I could tell basically the same stories I’ve always wanted. So was there, like, a genre hybrid that I could explore that would make my very small character stories cinematic? And so that’s kind of what what prompted this whole experience.

Fogel: Yeah, I mean, I think especially for women, it’s just been hard. And I think there are going to continue to be problems, especially with it sort of in some ways runs at cross purposes with the very necessary progress around “Me Too,” and that because it’s sort of like if you’re looking for a mentor who’s a director, who’s a very experienced director, and there just aren’t a lot of women who have been doing that for that long, your options are older men. And those older men probably, rightly so, have a certain amount of trepidation about entering into a mentorship relationship with a young woman. So it’s tough. It’s just it’s kind of something that people don’t talk about enough I think.

Ryssdal: Have you felt it change at all in the 16 years you’ve been doing this?

Fogel: Yeah, definitely. I have felt that there’s a lot of receptiveness to female stories now. I think some of it has a little bit — a lot of it is economically driven and driven by just kind of studios wanting to check that box because now they know they have a woman problem that they need to solve.

Fogel: It’s hard to you know, it’s hard to suss out what is real excitement to tell underrepresented stories and what is kind of just people realizing that they need to kind of catch up to the times. But I think it’s your one conversation away from knowing whether it’s authentic or not. You can just talk to people and know whether they’re saying, “Oh yeah, it’s just like a guy’s movie, but we’ll just put a famous woman in it and it will solve our problem,” and which is actually like, let’s revisit these narratives because we’re sick of the same stories over and over.

Ryssdal: Well, and that’s just to “The Spy Who Dumped Me,” right? It’s named after a Bond movie and it’s being billed and being written about as a Bourne-type thing but with women, but it’s not, because the dynamic that you see on screen is just, by definition, different between two women that it is between men.

Fogel: Yeah, I think there’s, to me like what motivated telling the story was really not political as much as it was just wanting to see a different version, just kind of a different tonal version of those stories. But yeah, it’s interesting to me that now talking about the movie a lot, I think about the politics and the gender politics so much in a way that maybe I didn’t when I was just inside.

Fogel: You know, so now I’m thinking, you know, there’s one scene in particular where —

Ryssdal: Don’t give it away.

Fogel: It’s in the trailer — where the girls are trying to drive this getaway car, but they can’t drive a stick shift and it’s a whole thing. It never occurred to me that that would be considered a gendered thing.

Ryssdal: Oh man, that’s so fascinating because I saw that in the trailer and I went, “Oh, my god, she’s actually making fun of women who can’t drive a stick!”

Fogel: It’s funny because I drive a stick. My male writing partner does not drive a stick. So we’re just, I mean, and maybe cluelessly so, because we are just thinking, “Oh, yeah, we’re gonna make a dumb Americans in Europe joke.” It didn’t occur to me that there would be gender politics and I understand there are. But yes, I’m kind of like understanding in retrospect my own responsibility.

Ryssdal: Will there be a day in your career, however much longer that lasts —

Ryssdal: (laughter) well, I’m about to torpedo myself here — where you won’t have to do these kinds of interviews anymore, talking about how women think about being on screen and all of that? Where it’s not relevant because it’s so common, I guess that’s the point, right?

Fogel: Right, I understand what you’re saying. I hope so, but I also, you know, I think that a lot of the things that we talk about when we talk about female directors apply to just women in leadership positions in any industry. I can’t imagine a time it won’t be relevant to some industries in my lifetime.