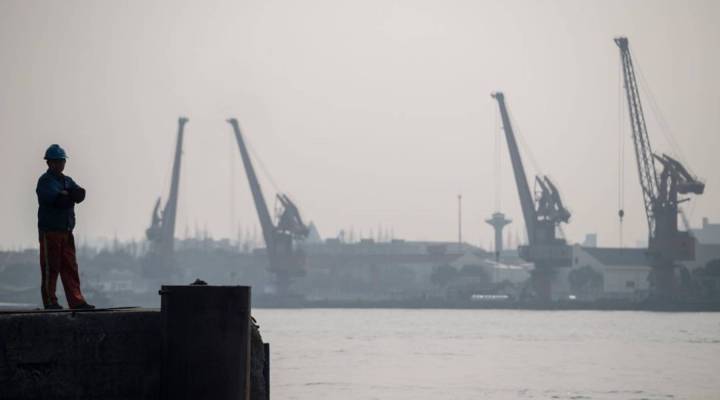 COPY
A worker standing at a dock of a port in Shanghai on March 22, 2018. JOHANNES EISELE/AFP/Getty Images
Trade showdown

A worker standing at a dock of a port in Shanghai on March 22, 2018. JOHANNES EISELE/AFP/Getty Images
Listen Now

At long last, someone has put me in charge.

We’ve been talking about President Donald Trump’s trade war stand-off with China for weeks. Now, finally, I’m sitting in front of the various levers that will determine how things shake out. I look over my options, make a couple adjustments and…

“I’m sorry to tell you, you did as badly as you possibly could have done,” said Oliver Roeder. He’s a senior writer at the data news website FiveThirtyEight, and he helped create the trade war simulation I just failed, spectacularly.

You can fail yourself right here — or maybe you already won. I was pitted against another FiveThirtyEight reader, randomly chosen from folks who already played. It’s a classic prisoner’s dilemma: both players decide how they want to set their own trade policy, then the site crunches the numbers to see how each country fares in 100 rounds of trade.

Each free trade is worth an equal amount, while imposing tariffs tilts the benefits one way or another. If both sites impose tariffs, everyone earns less.

I was too friendly in the first round, and when my opponent betrayed me I got taken for a ride. FiveThirtyEight lets you pick a few pre-set personas like “The Retaliator” or “The Copycat,” but you can also adjust sliders yourself to fine-tune your policy. You can even play the same opponent multiple times, changing your approach to see if you can eke out a win.

I got a little meaner in the second round and it paid off, sort of. I won the resulting trade war, but my opponent and I still ended up worse off than we would have been if we imposed no tariffs at all.

My path is similar to the one a lot of FiveThirtyEight readers took, Roeder said. Over about 600,000 games, his team found most people started friendly, but got more vindictive over time and more trade wars broke out. That’s in contrast to the real world, where more countries favored free trade post-World War II.

Of course this game isn’t the real global economy, Roeder cautioned, and it ignores a slew of real-world factors like diplomacy, existing trade deals, politics, history and so on.

But the moral of the story is more or less the same: You have to be adaptable, Roeder said, and balance mutual benefit with individual interest. That tension is exactly what the Trump administration is navigating with China and other trade partners now.