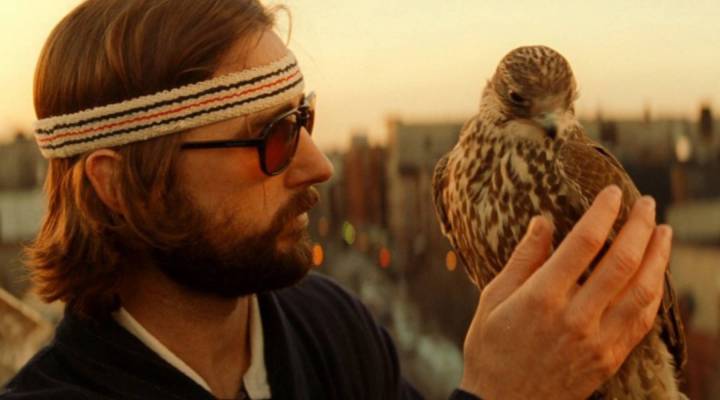 A still from "The Royal Tenenbaums," which isn't about falconry, but features a falcon as a major plot point. Buena Vista Pictures
The Uncertain Hour

A still from "The Royal Tenenbaums," which isn't about falconry, but features a falcon as a major plot point. Buena Vista Pictures

Falconry sits at a unique place in the United States regulatory structure, and you never know where it’s going to show up. Like in the movies.

It’s one of many weird-sounding rules we talked about in our most-recent episode of The Uncertain Hour, and it’s one listeners wanted to learn more about. If we’ve learned anything doing this show, it’s that every regulation is someone’s regulation. In this case, it’s a small group of falconers who also work in entertainment, and this rule affected their livelihood.

The rule was actually part of a larger regulatory package around falconry that was first proposed in 2005, then codified in 2008.

“This was not something that was kind of a top-down preceding, I think it was requested by the states, so it was kind of an interesting process,” said David Verhey, a lawyer who oversaw regulations at the Department of the Interior during the Bush administration. The package was in line with an overall move toward “cooperative conservation,” which in this case meant giving states sole responsibility over falconry licences.

While it gave up permitting, the agency also sought to clarify rules under the Migratory Bird Treaty Act, which protects hundreds of different species from capture, hunting and so on. Nestled in a section about educational uses for birds of prey, like peregrine falcons or red-tailed hawks, there it is: “You may not use falconry raptors to make movies, commercials, or in other commercial ventures that are not related to falconry.”

Mark Jackson remembers when he first heard about the rule. He’s a licensed falconer in California and an animal handler with decades in the movie business. He estimates he’s one of about five people in the local union that does both.

“Red-tail hawks, horned owls. … We had them all trained up, but one letter came and said you cannot rent those animals,” Jackson said. “So everybody went out and got a look alike.”

Non-native birds aren’t protected under the law, Jackson said. You still need a permit to own one, but they’re OK for commercial use. An African pied crow or an African tawny eagle can stand in for a raven or a bald eagle easily with a little dye or CGI. Of course, filmmakers could also use stock footage, film the birds in nature or opt to shoot out of the country.

Jackson’s an independent contractor, and he estimates he spent a relatively small amount, somewhere in the low five-figures, to comply with the regulation.

He said he understands and respects rules covering falconry, but this was another example of animal handling getting “regulated out of business.” After this rule came down, he said, some trainers thought about packing it up.

Jackson declined to elaborate, but Brian Millsap, national raptor coordinator for the Fish and Wildlife Service, wasn’t surprised to hear it.

Millsap is a falconer himself, and he was division chief for migratory bird management in the 2000s. He and a couple other employees crafted the falconry rules over six years. That’s a lot of resources devoted to rules that only affect about 4,000 people nationwide, Millsap said.

“And then you start carving that even finer and, well, OK, there’s the raptor propagators,” he said. “There’s folks that are using raptors for abatement to reduce crop depredation, and the falconers who want to educate.”

This whole issue speaks to the odd question people like Millsap have to ask themselves when writing the rules: How do you regulate something that’s older than democracy itself? Falconry predates most other modern forms of hunting, and it sprung up in several ancient societies independently. And unlike, say, agriculture, it hasn’t changed much.

When Millsap’s team had to decide what rules to develop, they prioritized activities in line with the department’s mission, he said. Education is an obvious one, so is breeding. Even some money-making pursuits, like hiring falconers to keep pests away from landfills, farms and ballparks, have conservation benefits.

“So I see the point, but I guess what I would say is the cost-benefit just didn’t bear out on that one,” Millsap said. “With regard to using birds of prey in advertising in either print or television, the conservation message isn’t there. Usually they’re being used to market sunglasses or to, you know, show how fast a sports car can go.”

Millsap emphasized that because theses birds are protected, you never really were allowed to use them for commercial purposes anyway. He knows of at least one falconer who lost a license for it before the rule was even put to paper.

“Oftentimes we think of regulations as being restrictive, preventing us from doing something that we otherwise would be able to,” he said. “But in the case of many of the regulations that we deal with in the Fish and Wildlife Service, especially under the Migratory Bird Treaty Act, the regulations allow flexibility.”