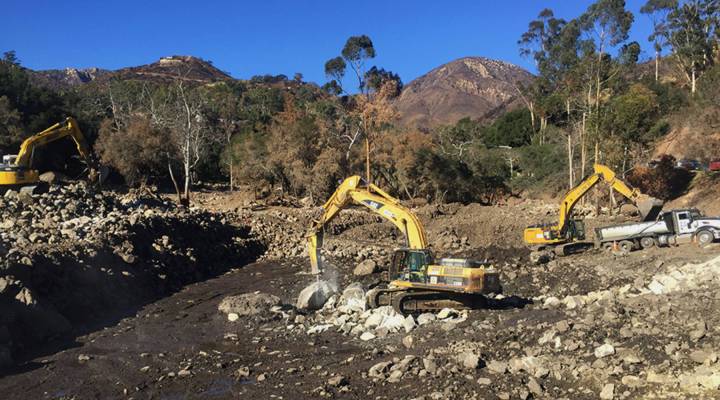 COPY
At Cold Springs Basin in Montecito, private contractors clear boulders with excavators and dump trucks. Under FEMA's orders, the Army Corps of Engineers is on a mission to clear 11 impacted basins by the end of February. Aaron Schrank/Marketplace

At Cold Springs Basin in Montecito, private contractors clear boulders with excavators and dump trucks. Under FEMA's orders, the Army Corps of Engineers is on a mission to clear 11 impacted basins by the end of February. Aaron Schrank/Marketplace
Listen Now

Most call it a mudslide, but Jon Frye wants people to understand that heavy rains sent more than mud rushing through Montecito three weeks ago. He prefers the technical term: debris flow.

“It’s almost like a wet concrete-type mixture that can end up floating rock the size of a school bus,” said Frye, an engineer with Santa Barbara County Flood Control. “It’ll take out anything it its way. And that’s what happened up here.”

The disaster claimed at least 21 lives and came in the wake of massive December wildfires that burned the mountains bare. Frye drives to the hardest hit areas, where some hillside homes were flattened by fast-moving boulders. Thick trees are uprooted everywhere.

“You can see that gas line, it’s bent like a piece of spaghetti, right there,” Frye said. “And to the left were several homes that are no longer there. They’re just gone.”

The public isn’t allowed into the disaster zone yet, but hundreds of government workers and dump trucks are working the hillside. A lot of the trucks haul rock out of debris basins, massive pits built to catch whatever falls from the mountains above. They were quickly overwhelmed by the storms.

“This basin was completely filled,” Frye said of one called Cold Spring. “In fact, it was like 125 percent filled with this rocky material that we’re looking at here.”

Dirt, trees and other debris are piled in the Montecito disaster zone.

Some boulders are so large that excavators with hydraulic hammers have to break them into pieces before they’re scooped into dump trucks and hauled 50 miles away. The Federal Emergency Management Agency and the U.S, Army Corps of Engineers have awarded more than $24 million in private contracts for this work so far.

“We don’t know when the next storm is going to come in,” Frye said. “We need these basins and channels back to their pre-storm condition.”

Clearing 11 basins will take at least through the end of February, according to federal officials, even with the 24-hour merry-go-round of dump trucks. And this is just one of several fronts in the effort. Officials are scrambling to find places to put all the rock and muck cleared from basins, creeks and public roadways.

Some pure dirt — meaning no rocks or trees or other stuff in it — gets hauled to the beach. There’s no swimming at Goleta Beach because of bacteria that could be in the dirt dumped there. Bulldozers push piles of it out into the surf.

“Every day, through one tide cycle, it’s all mixed in, and the next morning it looks likes the regular beach again,” said county environmental planner Seth Shank from behind an orange safety fence. He tells curious onlookers this is necessary because there’s already more debris than anyone knows what to do with, and cleanup crews haven’t even started on private property.

“Which is a big, big, big deal,” Shank said. “They say that basically 90 percent of the material is on private property, and so there is a huge volume of material still out there that’s going to have to be dealt with down the road.”

Many residents haven’t even seen their homes since they escaped the disaster. Local real estate agent Marco Farrell and his parents were rescued from their Montecito home hours after the disaster hit as their home filled with mud.

“The mud was knee deep in areas of my house,” Farrell said. “What’s frustrating for us is we want to get in to save what we can, and then comes the chore of dealing with that mud.”

Marco Farrell’s home and garage flooded with mud and debris during the disaster.

The Farrells have been staying at a friend’s house. Their neighborhood is still closed off to the public, and most residents cannot enter either.

“It’s a weird, twisted, staycation, where we’re just kinda fiddling our fingers waiting to get in to try to save our stuff as it slowly rots away,” Farrell said.

Cleaning up is too complicated and dangerous for families to do themselves. Thick layers of dried mud can be hard as brick. Some homeowners want to hire private mud haulers now, but authorities don’t want the extra traffic and safety risk.

Farrell understands the concern. Not far from his home, debris crews are still joined by forensic experts, who stand by and look for the bodies of the missing among the rubble.

Farrell reminds himself to be patient. But he’s eager for answers — from his insurance company, for one. Mudslides technically fall under flood insurance, which he and most Montecito residents didn’t have. Because the debris flow was caused by fires, homeowners policies should cover the damage. But that’s in insurers’ hands.