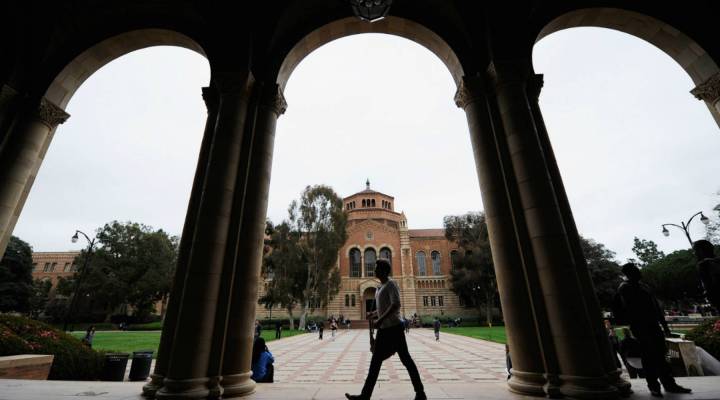 Maybe you’ve seen the ads? A somber voice ticks off the debts a young woman piled up while she attended college.

“She did it to work for you,” the announcer tells potential employers, “and now you can do something for her.”

That something is help paying off her debts. Gradifi, the company behind the ads, provides and manages an online portal that allows employers to make direct payments on their workers’ student loans. Companies pay Gradifi a monthly fee of a few dollars per employee.

At the company’s headquarters in downtown Boston, CEO Tim DeMello showed off a recent expansion. “I started the company a couple years ago, there were just three of us,” he said. “Now we’ve got 46 people on two floors.” Gradifi launched the loan repayment service last January with one client, the consulting firm PriceWaterhouseCoopers, DeMello said. “Now we’re adding about five to six new clients every single week,” he said. “We’ve got about 230 companies.”

And demand is only growing, as outstanding student loan debt has reached $1.4 trillion. That’s preventing a lot of younger workers from saving for retirement or buying homes, DeMello said. “The millennial workforce will be 50 percent of the workforce by 2020, and 75 percent of them graduate with student loans,” he said.

Startups like Tuition.io and Student Loan Genius offer similar services to help employers pay down those loans, and benefits powerhouse Fidelity just entered the business. Some employers are offering the perk without a middleman. Earlier this year Choptank Transport, a logistics company on Maryland’s Eastern Shore, announced it would start matching its employees’ student loan payments up to $1,500 a year.

“We did it at a companywide meeting and there were quite a few cheers and a few sighs of relief,” said Pam Hutchinson, vice president of human resources.

Choptank has a lot of entry-level jobs and recruits on college campuses. For people in their 20s, Hutchinson said, the assistance can be a more powerful draw than health insurance or 401(k) plans.

“They don’t think they’re going to get sick. Retirement seems just like eternity away, but this is something that they can take advantage of that will make a real impact on their life,” she said.

About 15 workers have signed up so far, out of just over 300. One of them is Sonny Hopkins, who graduated eight years ago from Clemson University. He’s got a family now, and had more than $4,000 to pay off when the benefit started.

“Between the help of Choptank and myself, I think the last time I checked I’m right around a thousand dollars out, so I’ll be wrapping it up here shortly,” he said. “It’s a blessing for sure to have that kind of help.”

That kind of gratitude doesn’t just help employers hold on to good workers. Financial stress can affect performance, said Kathleen Coulombe, a senior adviser with the Society for Human Resource Management. But despite its appeal, she said only about four percent of employers offer student loan assistance.

“I think one of the reasons is the tax implication related to that benefit,” she said.

Right now, workers have to pay taxes on any loan assistance they receive from an employer. A bill in Congress would change that. Much like the tuition reimbursement programs many companies offer, employers would be allowed to contribute up to $5,250 a year for student loans. “And so employers wouldn’t pay FICA tax on that benefit and employees wouldn’t pay income tax,” Coulombe said.

That would make the benefit a lot more attractive to potential recruits. Asked if it would boost his business, Gradifi’s DeMello laughed and said, “tenfold.”