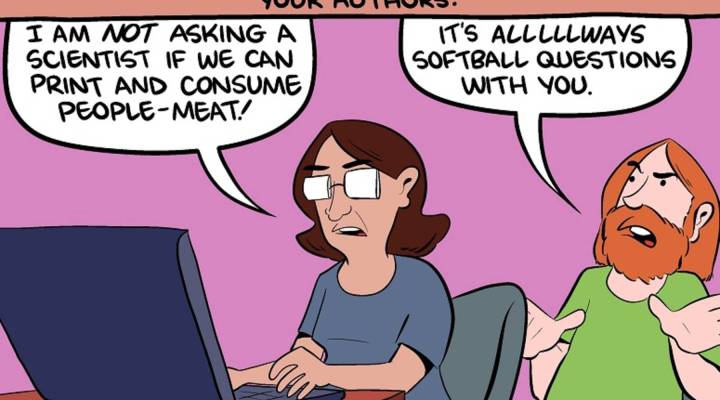 We’re going to take a detour here to the not-too-distant future to see what technologies might shake up the economy and help determine the future of our species. Kelly Weinersmith is a biologist and her husband, Zach, does comics, “Saturday Morning Breakfast Cereal” among them. Their new book is called “Soonish: Ten Emerging Technologies That’ll Improve and/or Ruin Everything.” It’s sort of a layman’s explainer mashed up with a comic book. The Weinersmiths spoke with Kai Ryssdal. Below is an edited transcript of their conversation.

Kai Ryssdal: So I’m going to start with this “Soonish,” the title. Kelly, it seems appropriately vague so as not to get you into any trouble.

Kelly Weinersmith: Well, we were very noncommittal about when these technologies were going to come to fruition, and a big theme of the book is that it’s really hard to predict that kind of stuff because technology doesn’t always make stepwise progression. Sometimes you have big discontinuous leaps, which make it really hard to predict. And then there’s things like economics that can get in the way that you didn’t necessarily think about when you were the engineer starting the project.

Ryssdal: So let’s talk about some of these things in the book. The first couple, and you put it in one section, is the universe soonish. You talk about space travel, you talk about asteroid mining. The interesting thing for me on this one, Kelly, was this section is all economics.

Kelly: Yeah. So that was an interesting thing that we didn’t necessarily anticipate going in was just how important economics is for a lot of this stuff. And at the end of the day, if the technology doesn’t have a market or the market isn’t working the way you anticipated it was, then the technology isn’t going to work out. And so there’s all sorts of market forces that can sort of mess with an engineer or scientist’s plans.

Ryssdal: And also, Zach, I mean, if we go asteroid mining for all these rare metals and we bring them all back to Earth somehow, we flood the market and the price falls. And where’s the incentive there?

Zach: Yeah, and it’s unpredictable. That’s what’s interesting. I mean, so in terms of how humanity is doing, if you found an asteroid full of platinum, which you probably won’t, to be clear, but if you did, you would probably crush the market. Humanity might be better off because we’d have a cheap catalyst, but you know, this stuff doesn’t happen if there’s no good market. You know, you have to have people willing, for asteroid mining, maybe to spend $100 billion to do it. There has to be a pretty pretty good risk assessment.

Ryssdal: What do you think about Elon Musk and all that he’s doing in this area of technology?

Kelly: Well, that is a fascinating question. He’s clearly doing amazing things to make access to space very cheap. He didn’t return our calls, and we would have loved to have talked to him about that. So he’s clearly the leader in this area and he wants to get to Mars sometime soon and set a colony up out there. That could be an entire different book, but the implications of that and what it’s going to mean when we have people on Mars, and they’re so far away that you can’t talk to them quickly or reach them for years.

Ryssdal: One of the things you guys point out in this book is that we are not keeping up with our technological advances, and you talk about robotic construction and how we have the technology to do a bunch of this stuff and we’re just not.

Zach: Robotics has been one of these fields that we’ve been very excited about for a long time, and it just seems to never quite come. So we actually found a paper about robotic construction about the experiments Japan did with it in the ’80s and ’90s. Japan is a very aging culture. The average age in Japan was, like, 46 now, quite old. And so the idea of a robot labor force is quite appealing. At least in the papers we found, it seemed like it was kind of a wash. So you can kind of imagine that you have a construction worker, and you give him this robot that’s supposed to help. And it helps by the time he knows how it works. But by the time you get there, you’ve lost all this time training yourself on a new machine or dealing with the robot’s deficiencies. So there’s a great deal of appeal here. I say that as someone who’s staring down the barrel of homeownership shortly. Yeah, I like the idea that a robot swarm just makes the house materialize for the cost of parts. Whether that will happen soon and what the economic implications are that’s kind of a scary question.

Ryssdal: Kelly, when you sat down to think about what’s realistic and what’s not with some of these technologies, and we’re going from bioprinting to basically chips in our brains to robotic construction, all that stuff, what was your over-under on on how realistic they are? Did you say, “This one is promising but not realistic, we’re not putting it in there”?

Kelly: Well, for all the technologies that you listed, people have been working on them for quite awhile, and there, you know, there were people we could find online like for bioprinting, for example, who had managed to print blood vessels that looked promising, like they could maybe one day provide nutrients to a liver, for example. It had to be far enough along that we could see that progress was being made. And then, you know, our gut had to tell us there was some chance that it would that it would work out, but we could be wrong.