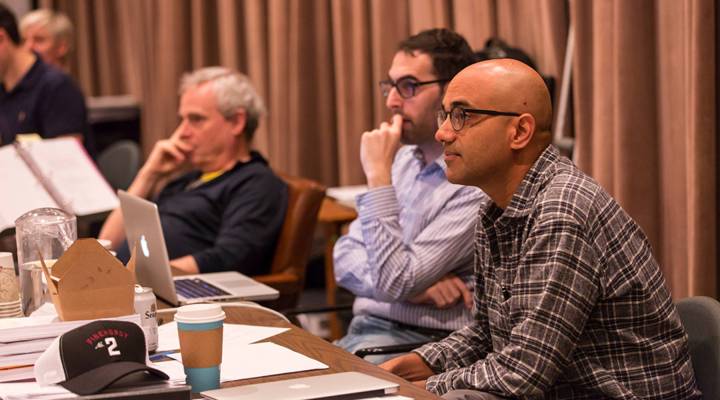 In the new play “JUNK” playwright Ayad Akhtar tells the story of financier Robert Merkin as he tries to take over an American manufacturing company in the 1980s. He took inspiration from the real junk bond kings at the time. He talked with Marketplace host Kai Ryssdal in the basement of the Lincoln Center Beaumont Theater, while rehearsals took place upstairs. Below is an edited transcript of their conversation.

Ayad Akhtar: Well I mean supervising is a big word. I mean I am participating. You know there’s still changes to be made, you know little tweaks here or there, you know nips and tucks and actually I rewrote an entire scene yesterday.

Ryssdal: I was going to say, so the draft of the script I read was dated September 10. This airs on the 5th of October, your preview night. Clearly you’re not done. How come, man?

Akhtar: Because you have a group of actors who can make you see where the potholes are even if they’re small. You know the big challenge with a play like this is that not everyone is going to understand the intricacies of high yield or leveraged buyouts or whatever it may be and so you know they don’t need to understand that. It’s about making the human actions and the human metaphors underneath all of that stuff very clear.

Ryssdal: Let’s back up for a minute and have you tell me how, I mean you’ve written a lot of things about Muslim Americans or Pakistani Americans and diversity in this country and we’re going to get to all of that. How do you come to finance?

Akhtar: My dad made a deal with me when I first moved to New York in my early 20s. He said if you read The Wall Street Journal everyday I’ll pay your rent … I still get the journal every day. He wanted to get me interested in the real world if you will …. and I’ve always had an interest in how finance shapes our way of being and thinking because I think it increasingly does.

Ryssdal: It’s interesting to hear you say that because this play, I’m not going to give anything away here, but it’s depressing as hell … and it really does point one to the fact that money and wealth and the accumulation of it are the fundamental American experience.

Akhtar: Yes, that’s right. I do believe that the accumulation of wealth is the expression of personal will par excellence in American life.

Ryssdal: Did you call guys you know on Wall Street say hey fact check this for me?

Akhtar: Yeah I mean actually one of my best friends is pretty high powered businessman and he reads everything I do. He comes the first preview, gave me notes you know. Most notably I had one line where I was making a contention about the Fed and how they changed their policy in ’79 with Volcker sort of initiating this.

Ryssdal: Get a load of you! This is great.

Akhtar: I mean October ’79 is in some ways the most important date, I think, in American economic history. You know because when Volcker decided to allow interest rates to rise to take care of inflation it changed the entire environment. It’s what created the possibility for high yield. It’s what created the appetite for leverage for debt. In some ways none of that may have happened if interest rates weren’t floating around 20 percent and people got a sense that you could just put your money in a bank account and you could make 20 percent. Well where else can I do that? From that point forward fixed-income departments at major banks became the most lucrative way to make money. It still is the case. But anyway, Steve and I got into a whole thing of arcana about what had actually happened and how the Fed was really changing policy and he just gave me so much grief that I ended up cutting the line.

Ryssdal: That’s too bad because that little riff right there was really really good. “Disgraced” the play for which you won the Pulitzer was about diversity and the immigrant experience and the the minority experience in this country.

Akhtar: Well  it was about a Wall Street lawyer who is not ultimately able to fulfill the promise of the American dream.

Ryssdal: Which is in many ways the immigrant experience, that’s sort of what it’s about.

Ryssdal: You aggressively seek out the the expression of diversity in your work. I mean here you are a Pakistani American guy born in Staten Island raised in Wisconsin.

Akhtar: Yes. I mean I’m not sure that I aggressively seek it out. I think I just reflect that it’s my experience. You know in this play there is you know there is an African-American lawyer, African-American law enforcement agent. There is a you know a Hispanic lawyer working for Bob Mirken, the junk bond king. You know there are a few Jewish characters in this play. Wall Street has often been a very ethnic place in a way sort of reflecting the kind of you know polyglot and sometimes not entirely melted pot of America.

Ryssdal: In the draft script that I read, there’s a sort of preamble, the thing where you talk about how you want it to look physically look on stage. You talk about the sets and how you don’t want set designers to aggressively try to replicate the era. You want it to be a little bit looser. You don’t want to be the origin myth.

Akhtar: Well I think that it would be easy to come to this play and see characters in like outrageous ’80s outfits with you know ’80s music pumping in and you could say “oh wow that funny era, look at what those people were like then.” But the fact is is that all those practices which were so shocking and appalling to people at that time have become de rigueur. In a way that backward glance of taking a look at this era of the ’80s through the filter of some of these mythic events that took place is a way to sort of try to look at our era now.

Ryssdal: Well let’s talk about that are now right because you had the ’80s you had the financial crisis which was almost 10 years ago now and we have in this economy in this society inequality increasing at a rate we haven’t seen in generations and here you write about this stuff in a very not hopeful way.

Akhtar: Well I don’t think we’re in a hopeful place. I think that it would be a disservice to people to offer yet another rosy picture of the benefits of globalization or financeization or whatever ancillary free market ideology or tenets that have been promulgated over the last 50 years that have now become catechism in our society. I don’t know that adherents to those beliefs is in our best interest and I’m not speaking as a bleeding heart liberal. I’m speaking as somebody who I think understands this stuff and understands, you know love him or hate him there’s a lot of things to hate about Henry Ford, but one of the things that he said which I think is a key observation is that if you can’t pay workers enough to buy the cars they make, you’re going to have a long term structural problem. That’s everybody’s problem that’s not just blue states problems or red states problems, that’s everybody’s problem. If the humble thing an artist can do you know is to tell a story that maybe makes people reflect on the situation, which is all I’m really trying to do and move them and entertain them at the same time give them lots of laughs before I depress them.