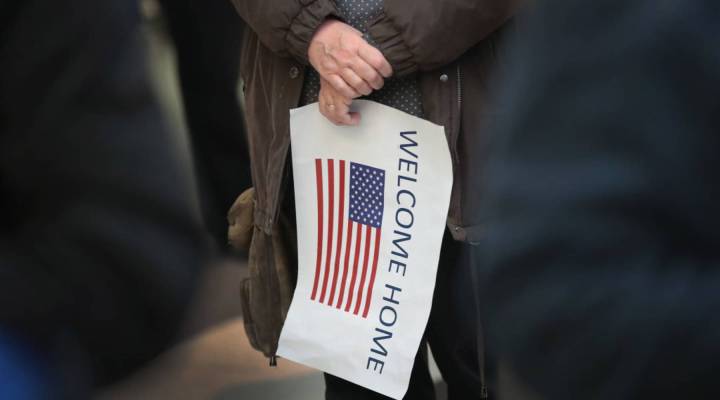 Much has changed over the last year for Ali, Fatima and their four kids. They’ve moved into a sweet yellow house with a big back yard. They’ve planted a vegetable garden next to the driveway where the children ride their bikes. Ali now has his driver’s license and a part-time job at the Cheesecake Factory.

Connecticut has started to feel like home. Ali recounts a visit to his daughter’s school for family day. She presented picture she’d drawn of her dad cutting her brother’s hair to her class. “Everyone was clapping and encouraging her as if it were their own kids,” he said through a translator. “I didn’t feel that I am a stranger in this community.”

But for all the change over the past year, one thing has remained: Ali and Fatima are still really worried about money. Their rent is about $1,000 a month, which they both say is a source of anxiety. The couple is still relying on a group of local volunteers for emotional and occasional financial support.

Typically, when refugees are resettled in the U.S., they’re assisted through a local nonprofit, which aids their transition in setting up an apartment, job searching, and enrolling in school or English language classes, among other things.

However, IRIS, a New Haven-based NGO, is experimenting with training volunteer groups from the local community to take on that role, which had helped them scale up their resettlement efforts. Regardless of the model, any financial support for the refugee is supposed to stop at six months. “We’ve already doubled that,” said Terri Schmitt, who is leading the volunteer group assisting Ali and Fatima. “We would love to be in a situation where they didn’t need us or turn to us for anything, unless there was a real crisis. I don’t think that’s where we’re at and it’s where we should be.”

The group is trying to not give Ali and Fatima any more financial support. However, the family is still at least $12,000 short on their annual expenses. Where that money will come from is unclear. Ali is only working about 20 hours a week, rolling napkins at the Cheesecake Factory, plus the occasional odd job. His employment is complicated by a back injury he sustained when he fell of his motorcycle during an airstrike in Syria. Fatima stays home with kids and the couple are both still limited in their English-language skills.

The family also leans on the volunteer group for help in other ways. For example, when Fatima broke a tooth this summer, she called a member of the group, rather than a dentist. “I think we are a little too comfortable being turned to at this point,” Schmitt said, of the group’s eagerness to help the family. “So they’re not as independent as we’d like them to be or as they should be.”

IRIS has placed 58 refugee families with volunteer groups so far. Of the 55 that have been in the U.S. over six months, roughly 65 percent were self-sufficient by the six-month mark. That climbed to about 90 percent after a year.

Going forward, IRIS wants to better train volunteers to practice tough love with refugees and find them affordable housing – a big challenge in the Connecticut suburbs where many volunteers live.