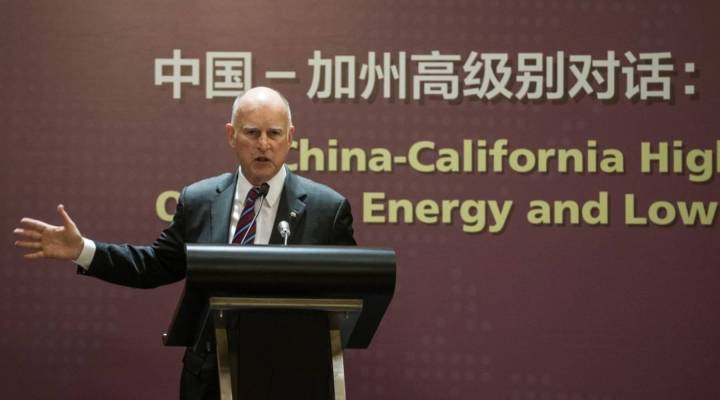 Last week Colorado officially joined the U.S. Climate Alliance — a group of more than a dozen states set on upholding the Paris climate accord goals, despite President Trump’s decision to withdraw from the agreement in early June.

Even with the United States officially out of the Paris accord, some are optimistic that the U.S. can still meet the Paris targets, even without the support of Washington.

California has already partnered with China and Germany on plans to reduce greenhouse gas emissions. Speaking at a press conference in June, Brown said states must now take the lead on climate negotiations.

“And the reason for that is there’s a lot to be done,” Brown said, “and because of the certain lack of focus in Washington, it becomes all the more imperative for the states to take responsibility.”

For the U.S., that means reducing emissions by 26 percent by 2025, based on 2005 levels. But meeting the Paris targets will likely also mean higher energy costs and tougher regulations.

“Even before the announcement about the Paris Agreement, it was going to be very very difficult,” said Robert Stavins, director of the Harvard Project on Climate Agreements.

“The most important thing that these states can do is to link their policies together,” Stavins said. “That will bring down the cost for all of them.”

Courtesy of Inside Climate News

California is already pressing ahead with a joint cap-and-trade program to reduce greenhouse gas emissions with Quebec and Ontario. But Kate Larsen of the Rhodium Group points out that future reductions will come harder than before.

“The 14 or 12 states that are part of the coalition represent a small and a declining share of total U.S. emissions, because these are the states that have been out ahead already,” Larsen noted.

In addition to the states, over 300 cities are also pledging to help, many of which already have projects underway, such as Richmond, Virginia’s, new $49 million bus rapid transit line, scheduled to open later this fall.

“Just like getting on to a metro train, it’s the same thing as that. The signals will all be timed to favor the bus, so the bus is not waiting with traffic like the cars are,” said Alicia Zatcoff, Richmond’s sustainability director.

Developing public transit will help take cars off the road, but without support from Washington, can states still pull the rest of the country along to reach the Paris targets?

“From my vantage point, I think the answer is yes,” Zatcoff said. “We’ve already reduced our emissions 15 percent, and we’re really just getting started.”

In an effort to further encourage local governments, California Gov. Brown announced a plan to host a global “climate action summit” in San Francisco next year.