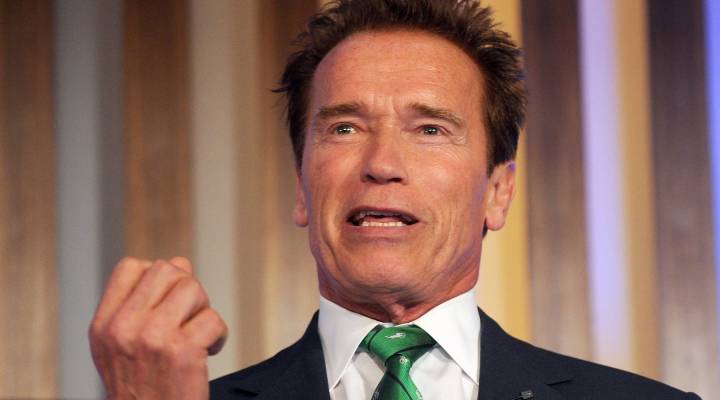 There is no such a thing as a self-made man, Arnold Schwarzenegger said today while delivering a commencement speech at the University of Houston. The former body builder, movie star and lawmaker urged new graduates to acknowledge everyone who has helped them along the way and help others, including immigrants who come to the United States.

“You’ve got to help others. Don’t just think about yourself,” said Schwarzenegger, who said previously that he turned down the $40,000 speaking fee negotiated on his behalf.

Here is an excerpt from the Terminator’s speech:

“Now, on your diplomas, there will be only one name on it and this is yours. But I hope that that doesn’t confuse and that you think that you maybe made it this far by yourself. No you didn’t. It took a lot of help. None of us can make it alone. None of us. Not even the guy that is talking to you right now that was the greatest bodybuilder of all time. Not even me that has been the Terminator and went back in time to save the human race. Not even me that fought and killed predators with his bare hands.

“This is so important for you to understand. I didn’t make it that far on my own. I mean, to accept that credit or that mantle would discount every single person that has helped me to get here today — that gave me advice, that made an effort, that gave me time, that lifted me when I fell. It gives the wrong impression that we can do it alone. None of us can. The whole concept of self-made man, or woman, is a myth.”

Schwarzenegger added that he enjoys reading stories about how he is a self-made man but that they do not tell the whole story. He recalled his early days in the U.S. when he arrived with $20 in his pocket and “some sweaty clothes in a gym bag.” It was then, he said, that he “saw first hand how generous American people are.” The former California governor credited God, his parents, teachers, coaches and even Jay Leno, on whose show he launched his gubernatorial campaign, for helping him get this far. He also highlighted the role that the California lawmakers played in helping pass the various legislation he proposed, pointing out that he did not do it alone.

“America has proven to be the greatest country in the world, where anyone can make it,” Schwarzenegger said. “This place has given me opportunities step after step, all the way through all my three careers and the millions and millions of dollars I made — all because of America. So thank you America for the great thing you are doing for immigrants that come over here.”

During the 20 plus-minute speech, Schwarzenegger never once mentioned President Trump by name, but criticized much of what Trump stands for. Trump’s presidential campaign was based on the premise that he is a successful, self-made businessman who was going to run the government as a business. Trump also campaigned on the promise that he would enact tougher immigration policies and focus on putting America first.

Today’s speech comes months after Schwarzenegger said he would not be coming back to host another season of Trump’s reality show “The Apprentice.” In a statement announcing his decision, he said the show had “baggage.” He later clarified that the baggage was Trump.

“With Trump being involved in the show, people have a bad taste and don’t want to participate as a spectator or as a sponsor or in any other way support the show,” Schwarzenegger told Empire magazine.

Trump poked fun at the show’s low ratings in February, saying: “They hired a big, big movie star, Arnold Schwarzenegger, to take my place. We know how that turned out. The ratings went right down the tube. I want to just pray for Arnold for those ratings.”

At the end of March when Gallup released a poll showing that Trump’s approval had dropped to 37 percent, Schwarzenegger hit back in a video posted to Twitter: “Donald, the ratings are in, and you got swamped. Wow. Now you’re in the 30s?”

Hey, @realDonaldTrump, I have some advice. See you at Hart Middle School? Here’s more info about #afterschool: https://t.co/NOgdhBHyyp pic.twitter.com/NQI2OdVqtF

No word, or tweet, yet from the president on whether he watched Arnie’s speech.