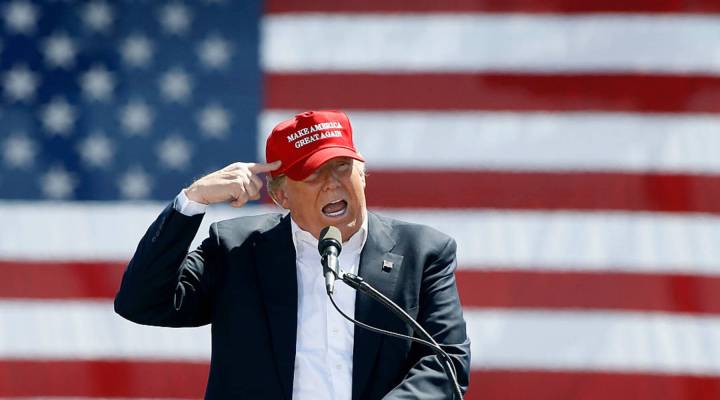 President Donald Trump has a message for the 2017 graduates: Don’t be afraid to be an outsider, even when critics tell you you’re wrong.

“Nothing is easier or more pathetic than being a critic,” Trump said during his commencement speech today at Liberty University. “The future belongs to the dreamers, not the critics.”

This is an excerpt from his speech:

Be totally unafraid to challenge entrenched interests and failed power structures. Does that sound familiar, by the way? The more people tell you it’s not possible and that it can’t be done, the more you should be absolutely determined to prove them wrong. Treat the word “impossible” as nothing more than motivation. Relish the opportunity to be an outsider. Embrace that label. Being an outsider is fine. Embrace the label, because it’s the outsiders who change the world and make a real and lasting difference. The more that a broken system tells you that you are wrong, the more certain you should be that you must keep pushing ahead. You must keep pushing forward.

Well, this definitely sounds familiar. Is this Trump’s guide to running a government? Throughout his campaign, Trump positioned himself as an outsider who was going to fix the system. That message echoed throughout his commencement speech.

Trump previously spoke at the University’s graduation ceremonies in 2012 and then again in 2016 during his presidential campaign. The 45th president was pleased to find out that today’s speech set a new record for commencement attendance with more than 50,000 people in attendance.

“We love setting records, right?” he said, just seconds after he stepped up to the lectern. He mentioned the audience again halfway through his speech, commenting that he was so happy that the stadium was “packed.”

Trump was not the only one to deliver a commencement speech to colleges this week. Other commencement speakers included Will Ferrell, Sen. Elizabeth Warren, former California Governor Arnold Schwarzenegger, Facebook COO Sheryl Sandberg and Starbucks’ chairman Howard Schultz. Here’s some of the advice they had for graduates:

The comedian joked that while this was his first commencement at an actual university, he has previously spoken at number of other universities including Debbie Dootson School of Trucking, Hollywood DJ Academy and Trump University.

In his speech, Ferrell recounted the early days of his career, including the days when he had just $20 in his bank account and considered other careers such as being a substitute teacher.

“Yes, I was afraid,” Ferrell said of that time. “You’re never not afraid. I’m still afraid. I was afraid to write this speech. And now, I’m just realizing how many people are watching me right now, and it’s scary. Can you please look away while I deliver the rest of the speech? But my fear of failure never approached in magnitude my fear of what if. What if I never tried at all?”

While Trump advised the audience to not listen to the critics, Warren advised graduates at the University of Massachusetts to be the critics.

“If elected officials don’t hear from people like you, then the policies will be set by the people they do hear from and believe me, they hear plenty from corporate CEOs, from Wall Street, from giant corporations and from others who spend buckets of money to make sure that their interests are heard,” she said.  “And here is the thing, your elected officials are increasingly working only for the few, the very wealthy few, and they are setting policies only to benefit the few, the very wealthy few, and if that doesn’t change soon then this country will fundamentally change. It is your world, your future that is on the line.”

Two years ago, Sandberg’s husband Dave Goldberg passed away. His passing and her life afterward were at the core of her commencement speech at the Virginia Tech University.

After her husband passed, Sandberg said she “dove into the research on resilience and recovery,” and the most important thing she learned was that people are not born with resilience, but build it into themselves. She said people should build “collective resilience” and during the process put themselves into the shoes of others — those from a different race, different country, different economic backgrounds.

“Build resilient organizations,” Sandberg encouraged the 2017 graduates. “Speak up when you see injustice. Lend your time and your passion to the causes that matter. My favorite poster at Facebook reads, “Nothing at Facebook is someone else’s problem.” When you see something that’s broken and there is a lot that is broken out there, go fix it. Your motto demands that you do.”

There is no such a thing as a self-made man or woman, the Terminator said in his commencement speech at the University of Houston.

“None of us can make it alone. None of us. Not even the guy that is talking to you right now that was the greatest bodybuilder of all time. Not even me that has been the Terminator and went back in time to save the human race. Not even me that fought and killed predators with his bare hands,” Schwarzenegger told the graduates.

Since no one can make it alone, the former California governor encouraged his audience “to help others. Don’t just think about yourself.”

Similarly to Schwarzenegger, the Starbucks’ chairman reminded students at the Arizona State University that they did not make it all the way to graduation day by themselves. As such, they should help others and think about the future generations. According to Schultz, his generation — especially the political leadership in Washington — have weakened the strength of the American dream by being “more focused on fighting with each other than walking in the shoes of the American people and vitriol rules the day in Washington.”

“Your generation can bring people together like no other,” Schultz told the crowd. “You can innovate, create, and lead. Your generation will transform our economy and create millions of new jobs. You will develop cleaner energy. You will make it so racism only exists in history books. Yes, you will. You will be the generation that teaches the world that we are at our best when we recognize, respect, and celebrate our diversity. You can and you will make your mark on our country and our shared humanity. Dream big, and then dream bigger, a more innovative dream, a more inclusive dream.”