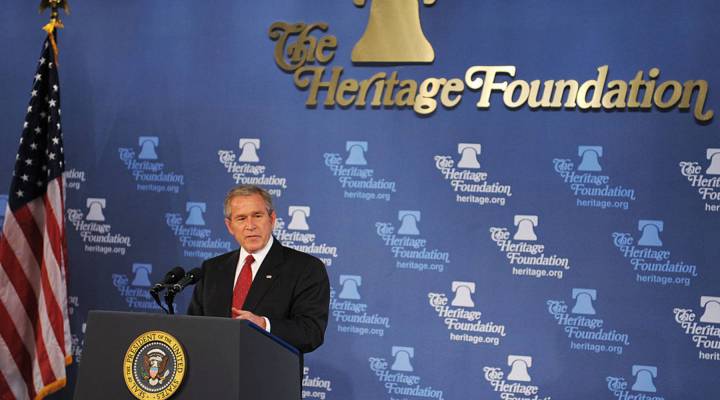 COPY
The Heritage Foundation's role in the conservative movement goes back to the 1970s, says Atlantic writer Molly Ball. Above, George W. Bush speaks to the foundation in 2007. MANDEL NGAN/AFP/Getty Images

The Heritage Foundation's role in the conservative movement goes back to the 1970s, says Atlantic writer Molly Ball. Above, George W. Bush speaks to the foundation in 2007. MANDEL NGAN/AFP/Getty Images
Listen Now

There’s some deeply political news out of the Washington policy world this week that’s pretty broadly economic, too. Former GOP South Carolina Sen. Jim DeMint is out as president of The Heritage Foundation, a conservative think tank.

Heritage has had substantial influence, not just on Washington policy, but on health care and welfare reform during the last 40 years.

Kai Ryssdal spoke with Atlantic staff writer Molly Ball to get the backstory on Heritage and learn about its changing role in conservative politics.

Kai Ryssdal: How did Heritage get to be “Heritage,” capital H?

Molly Ball: Well, the Heritage Foundation has a storied history in the conservative movement dating back to the 1970s, even before Ronald Reagan was elected, when conservatism was really starting to gain respectability as an ideology and as a philosophy as a set of ideas. And then, once you get Ronald Reagan elected, the Heritage Foundation presented the incoming president with 2,000 ideas in a 20 volume package. Ronald Reagan handed it out to every single member of the Cabinet in the first meeting, and by the end of his first year in office, Heritage estimated that 60 percent of those ideas had been put into practice in some way by the president.

Ryssdal: So, amazingly effective — not just productive, not just voluminous, but effective, too.

Ball: That’s right. The idea was that it was a “think tank” in the sense that they were providing ideas of academic caliber, but they were also an “action tank.” They were getting those ideas put in front of policymakers at the same time they were also policing the debate. They were not afraid to tell Reagan when they thought he was not conservative enough. They blasted Reagan when he sought to do things like raise taxes. Every Republican president, and many Republican politicians, have drawn the scorn of Heritage for not being quite right-wing enough. That was a trend that really began to intensify over the course of the Obama administration.

Ryssdal: Well, let me back up for a minute. It bears a mention here that it had influence in Democratic circles as well — Clinton and welfare reform, for one.

Ball: Yes. I don’t think that you could say that the Heritage Foundation had the same kind of clout in the Clinton administration as it did in the Reagan administration. But it is true that these ideas began to gain actually bipartisan credence because they were seen as a sort of constructive contribution from the right side of the aisle. So you had the welfare reform that Bill Clinton ended up enacting, inspired in part by ideas that came from the Heritage Foundation. The Heritage Foundation, also in the 1990s, came up with the idea of an individual mandate to buy health insurance as a conservative means of enacting universal health care. The Heritage Foundation ended up distancing itself from that idea, but it was very famously the basis of the sorts of health care plans that were put into place, first of all by Gov. Mitt Romney in Massachusetts and then by President Obama on a national scale.

Ryssdal: Let’s get to present day then and President Trump. He cited Heritage on the campaign trail more than once. They gave him a budget blueprint as he was going into the White House, right?

Ball: A lot of Heritage’s ideas now have traction in this current White House. But at the same time, the struggle for Heritage now is a part of the bigger struggle over what it means to be a conservative in the Trump era. The blueprint that Heritage has established in recent years looks much more like a Ted Cruz. And so, it has struggled, as all conservative institutions have, to adjust itself to deal with this new president.

Ryssdal: Well it’s interesting actually now, just as Paul Ryan, the speaker of the House, said as Republicans take over a unified government in Washington, that governing is hard versus being in opposition — true for lawmakers, clearly, and also now true for think tanks and those on the outside trying to affect policy.

Ball: What I draw from this is that even though Republicans have consolidated control of the White House and both houses of Congress, you’re sort of previously scheduled Republican civil war is still underway. The same conflicts that wracked the party throughout the Obama years and during the Republican primaries, those are still going on, and those players are still fighting over what it means to be a Republican.