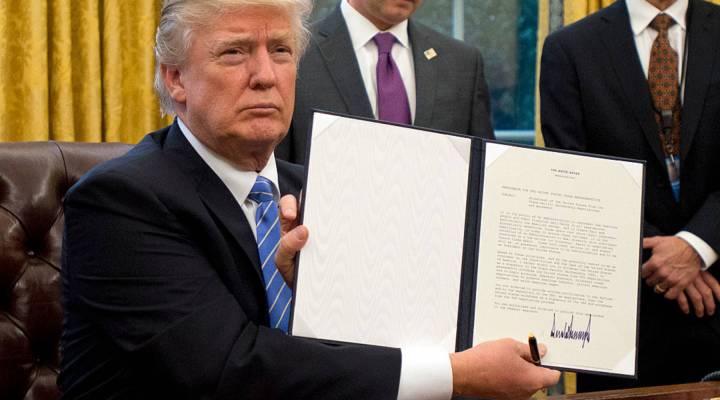 President Donald Trump has made clear he is not into multilateral trade negotiations. Take the Trans-Pacific Partnership. He withdrew the U.S. from that agreement, and he says he will conduct these kinds of talks one-on-one from now on, which is quite a change from the past.

For decades, the U.S. has mostly pursued multilateral negotiations. Nora Bensahel, a professor in the School of International Service at American University, said there’s good reason for that.

“Part of the idea of a multinational trade agreement is that you are cementing a regional cooperation with friends and allies that you want to deepen relationships in general with,” she said.

She said it’s better for trade and diplomacy.

Still, Scott Miller, of the Center for Strategic and International Studies, said it’s not surprising the new president and longtime businessman prefers to operate one-on-one.

“It seems to me that President Trump, given his long history in the real estate business, is quite comfortable in bilateral settings,” he said. “Most real estate negotiations are between a buyer and seller.” He said Trump would like to keep that dynamic in his trade deals. “I think he thinks of the U.S. as an asset he doesn’t want to dilute in a multilateral setting,” he said.

“You certainly in a bilateral agreement can more force your demands and your way than if you are negotiating with a block of countries that can unite to try and counter your weight,” she said. Still, she added, trade agreements are too secretive, whether they’re bilateral or multilateral. She wants the public to have more say.

Nora Bensahel of American University has a different concern. She said a series of bilateral agreements could harm the U.S.’s relationships with many of its allies. She said one-on-one talks with various nations will make allies nervous, and if they feel left out of the fold, they may “decide that it’s better to work with countries we see in the United States as potential adversaries instead of working through the U.S.-led global order.” That would be bad for everyone, she said.