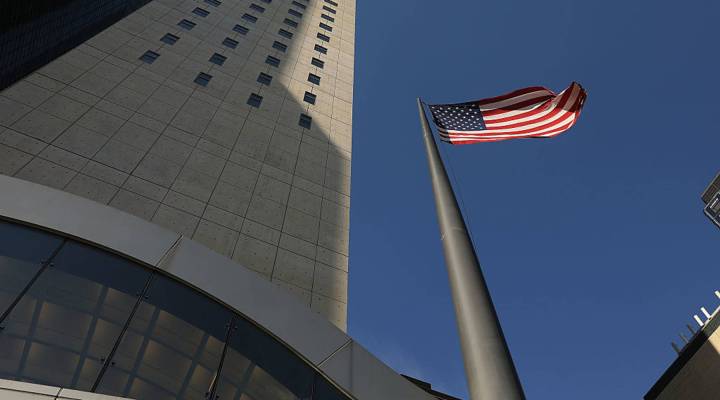 COPY
The American flag flies outside of the United States Mission to the United Nations on January 26, 2017 in New York City Spencer Platt/Getty Images

The American flag flies outside of the United States Mission to the United Nations on January 26, 2017 in New York City Spencer Platt/Getty Images
Listen Now

Back in 1953, President Dwight D. Eisenhower addressed the United Nations General Assembly with these words:

“I know that the American people share my deep belief that if a danger exists in the world, it is a danger shared by all.”

But President Donald Trump is more skeptical of taking on other nations’ problems. He has made “America first” his mantra, and he’s talked about cutting funding to international organizations. That would mark a real change. The U.S. is a big contributor to many multilateral institutions, like the United Nations, and has been for decades.

News came out in January that the administration might consider cutting as much as 40 percent of U.N. funding, though there’s been no official decision.

John McArthur, a senior fellow at the Brookings Institution, said such a large cut could be disastrous, depending on which agencies saw their budgets slashed. He used the World Food Program as an example.

“The U.S. gives 40 percent of the budget,” he said. “So if you cut 40 percent by 40 percent, that would come to 12 million people a year not getting access to food support.”

He said it’s hard for Americans to see the benefits of the U.N. because they’re largely invisible. He described the U.N.’s many agencies as helping make the world safer by providing everything from poverty relief to vaccinations. And then there are U.N. peacekeeping troops stationed in trouble spots.

“A lot of this is about investing in burden-sharing with other parts of the world,” he said. “It’s also about risk mitigation to avoid much worse conflagrations of conflict that would be much more painful for societies in the U.S. and around the world.”

But over the years, plenty of people have come to see the U.N. as an unwieldy bureaucracy that doesn’t always live up to its mission.

Brett Schaefer of the Heritage Foundation said U.N. peacekeepers aren’t necessarily a good value for the money. He pointed to reports last year that in South Sudan, U.N. troops refused to help as local fighters attacked and raped civilians. Former U.N. Secretary-General Ban Ki-moon responded by firing the then-commander of those peacekeepers.

“Are we getting what we expect and should expect from those peacekeeping operations considering the presence there and the expense the international community is providing to support those operations?” Schaefer asked. He said it’s no bad thing to check how U.S. funds are being used.

“I think the U.S. should periodically do an assessment of contributions to international organizations to make sure those contributions are getting value for U.S. taxpayer dollars,” he said.

Nathan Sheets, a fellow at the Peterson Institute for International Economics, agrees that’s every administration’s prerogative. Until recently, he was undersecretary for international affairs at the Treasury under President Barack Obama.

He said at the end of last year, the U.S. and many other countries pledged $75 billion to the World Bank’s International Development Association. The idea is to help poor countries with things like health care, clean water and teacher training. And now the new administration and Congress will have to evaluate that pledge and decide whether to follow through on the U.S. contribution.

“And I see that as being an enormous decision,” Sheets said, “and probably in this space of international financial institutions, the first real dollars and cents decision that the new administration will need to make.”

Why should we care? He said if poorer countries struggle economically, political instability may increase and their money woes lead to a more lethargic global economy. Which, he said, “means less sales abroad for U.S. firms, potentially less employment in the U.S. and slower growth here at home.”

Sheets said we are all connected, whether we like it or not.