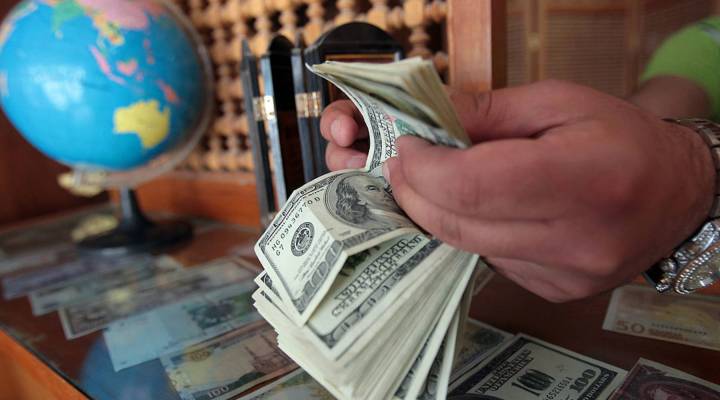 It's not just U.S. money that makes its way around the globe in remittances.  Ali Al-Saadi/AFP/Getty Images

It's not just U.S. money that makes its way around the globe in remittances.  Ali Al-Saadi/AFP/Getty Images

President Donald Trump does not like remittances — the money immigrants send back to their countries. After all, money leaving the country does not align with his America first ideology. While his administration is trying to figure out whether taxing remittances might be a way to pay for the border wall, Mexicans in the U.S. keep sending money to their homeland. The amount of remittances sent to Mexico reached $2.3 billion in April, according to the country’s central bank. Last year, about $27 billion was sent to Mexico.

“We must assure the free flow of remittances,” Mexican President Enrique Pena Nieto said in January, adding that remittances are “an invaluable contribution to national development and indispensable for millions of Mexican families.”

Mexico is not the only country relying on remittances, and the U.S. is not the only country that sees money leaving its borders. Global remittances have grown from $296 billion in 2007 to $445 billion in 2016, according to a new report released by the United Nations International Fund for Agricultural Development. The report estimates that between 2015 and 2030, more than $6.5 trillion will be sent to low- and middle-income countries.

While that might seem like a lot of money, migrant workers around the world earn about $3 trillion a year and only about 15 percent of their earnings are sent back home. Altogether about 200 million immigrants — equally divided among men and women — around the globe send money to their families. About 800 million people around the world are directly supported by remittances.

“It is not about the money being sent home, it is about the impact on people’s lives,” said Gilbert F. Houngbo, IFAD president, in a press release about the U.N. report. “The small amounts of $200 or $300 that each migrant sends home make up about 60 percent of the family’s household income, and this makes an enormous difference in their lives and the communities in which they live.”

The majority of the money sent to home countries is usually spent right away, the report said. About 75 percent of remittances are used to cover basic needs such as food, shelter and recurring bills. Another 10 percent of remittances are used for things like education and health, while the remaining 15 percent is used for savings and investing in businesses or real estates.